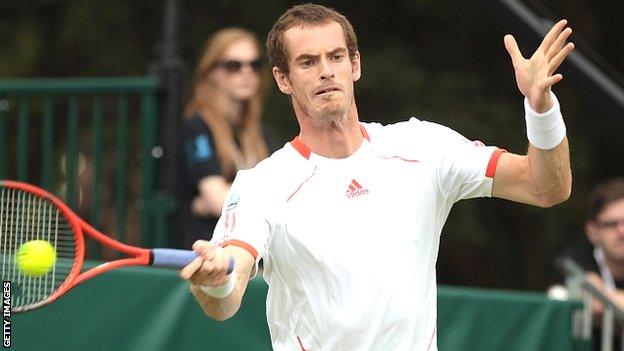 World number four Murray is in the same half of the draw as second seed Rafael Nadal,who has beaten the Scot in the last two Wimbledon semi-finals.

Sharapova, who won Wimbledon as a 17-year-old in 2004, faces Anastasia Rodionova of Australia in the first round and she cannot meet second seed Victoria Azarenka or four-time champion Serena Williams until the final.

"This is a tricky section of the draw for Murray, starting with the former world number four who beat him several years ago at the US Open but is past his best. After that it will be 6ft 10in Ivo Karlovic and his massive serve and maybe in round three it's Marcos Bagdhatis or Kevin Anderson or Grigor Dimitrov - there's a lot of talent there - and he's in David Ferrer's quarter and Rafa Nadal's half."

"I have never played her before and I actually don't know very much about her, which is quite strange really because we've both been around a while," said Baltacha.

"It's not a bad draw at all but everyone can play and everyone badly wants to win every match at Wimbledon, so I'll need to be ready.

"My neck has been getting better slowly since I pulled out of Eastbourne and there has been a big improvement in the last day or so. I'm having lots of physio on it and I'm very optimistic that I'll be fine for Tuesday."

Murray but leads Davydenko 5-4 in the career head-to-head going into their first meeting on a grass court.

While the Russian has four Grand Slam semi-finals to his name - and won their only previous meeting at a Grand Slam, the 2006 US Open - he is now ranked 47th and has never been beyond the fourth round at the All England Club.

It is the eighth time that six-time champion Federer, who faces Albert Ramos in his opening match, has been placed in Djokovic's half of the draw, while Nadal starts against Thomaz Belluci on Tuesday.