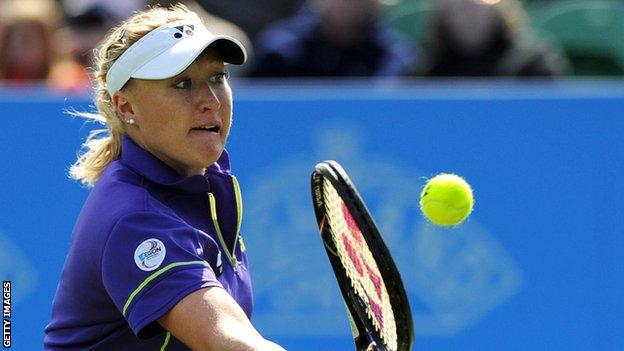 It's hard to believe it's time for Wimbledon already and even harder to believe that this will be the 11th time I've competed in the main draw here.

Compared with some of the younger players I'm kind of an old lady but I wouldn't trade in all the experiences I've had at Wimbledon for being a few years younger.

I'd probably swap the little injuries that tend to crop up as I get older, though.

This past week I have been struggling after waking up following my first match in Eastbourne unable to move my neck.

I was devastated at having to pull out of my scheduled match against Laura Robson and couldn't play doubles with Anne Keothavong either.

Thankfully my neck has been improving day by day and it's got a lot better over the last 24 hours.

Rob, the physio who works with the British players, has certainly been very busy as I've had a lot of treatment to try to get 100% fit for my first-round match against Karin Knapp of Italy on Tuesday.

I have never played her and I don't know much about her but I will certainly be asking around and looking for a few clips on YouTube to get an idea of how she plays.

I know it's not the worst draw I could have had, but everyone can play and I will need to play well.

Anne and I have known each other for years because we had the same coach as teenagers and our careers have always been in parallel.

We're the same age - 28 - and both of us made the semi-final of Wimbledon juniors in 2001, which seems like such a long time ago.

We've both played Fed Cup for the last 11 years and we've played a bit of doubles down the years so I think we'll have some fun out there. We play Romanians Irina-Camelia Begu and Monica Nicolescu in the first round.

Anne and I will find out on Thursday whether we have made the Olympic squad. There will be at least one wildcard and as the current British number one, Anne has a very good chance of getting it, whereas it's a more anxious wait for me.

I have absolutely cherished every moment of playing Fed Cup for my country so it would mean the world to me to compete, but it's out of my hands now.

At least I know for certain that I will be carrying the torch, which will happen on 19 July in Kent. That will be an incredible honour for me.

You can't take any of the experiences you have as an athlete for granted and you realise that more as you get older.

Last October I took the girls from my academy - the Elena Baltacha Academy of Tennis - to Wimbledon as a special treat.

They are from primary schools in deprived areas of Ipswich and some of them had not picked up a tennis racket until we started working with them.

I'm really proud of how well they've done and it was fantastic to see the look on their faces as they took their first look at Centre Court.

It was very inspiring to see how excited the girls were and it was a great reminder for me of just how special it is to play at Wimbledon.

Sometimes you can get caught up in the stuff that goes with playing a tournament - everything from sorting out your rackets and special grass-court shoes to tickets for family and friends - and it's easy to forget just how lucky you are to be playing there.

If I forget that during this year's Wimbledon then I will just try to remember the excitement on the faces of those little girls.