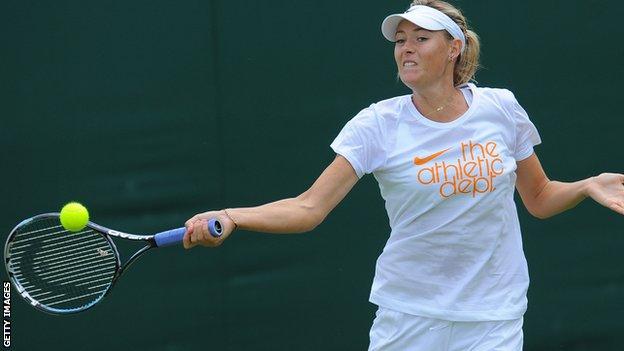 World number one Maria Sharapova says following up her French Open triumph with victory at Wimbledon is "the toughest turnaround" in tennis.

The top seed is bidding to be the first woman to win both titles in the same year since Serena Williams in 2002.

"I think it's the toughest back-to-back Grand Slam-wise, without a doubt," said the 25-year-old Russian.

"Especially if you're coming off a French Open win, or a final, it's the toughest turnaround."

Sharapova, runner-up to Petra Kvitova of the Czech Republic at Wimbledon last year, has the chance to add a second grass-court grand slam to her first on clay after her straight sets win over Italy's Sara Errani in Paris earlier this month.

She added: "As much as you want to celebrate and enjoy it, you come here and it's like a whole new ball game.

"But I think that's the beauty of tennis, there's so much out there to achieve. It always seems like it's back to back, so that's nothing really new."

Wimbledon will be Sharapova's first tournament since her French Open win, but she feels she is in good shape to take on the grass of the All England club, where she will face Australian Anastasia Rodionova in the first round.

"I've been fortunate that the weather has held up really well, so I've had a lot of grass court practice."

Meanwhile, Serena Williams says she and her sister Venus have no intention of retiring yet.

Serena, 30, has not won a Grand Slam since taking her fourth Wimbledon title in 2010, and her first-round exit at the French Open to Virginie Razzano was a major shock, but she is adamant she will carry on for some time.

"I have no intention of stopping and I don't think [Venus] does either," she said.

"I love competing. I love the challenge. I love holding up trophies. So I guess if ever I feel that I can't do that, then maybe I won't play anymore.

"I wouldn't be here if I didn't feel confident. Whether I had won in Paris or lost like I did in the first round, I am always extremely motivated."