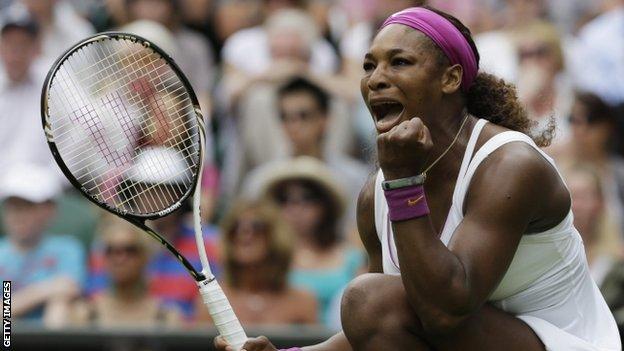 Serena Williams and Maria Sharapova booked their place in the Wimbledon third round with contrasting victories at the All England Club.

Four-time Wimbledon champion Williams brushed aside Melinda Czink 6-1 6-4 in under an hour on Centre Court.

Sharapova faces Taipei's Su-Wei Hsieh in the next round while sixth seed Williams takes on China's Zheng Jie.

French Open champion Sharapova, who won her first Grand Slam on the grass courts of Wimbledon in 2004, was in the ascendancy against her Bulgarian opponent when bad light stopped play on Wednesday evening.

On resumption, the Russian, 25, started the more tentative of the two players, as Pironkova broke back and then battled on to win the second set tie-break and level the match.

But Sharapova regrouped and stepped it up in the final set, breaking her opponent three times to win the set to love.

"It's always difficult to stop a match, especially when you have the momentum," said Sharapova. "I wanted to start strong but it didn't happen.

"Sharapova had 30 unforced errors today, but very few in the last few games, and that's critical for her. I'm a huge fan of Sharapova. I have so much respect for the way she carries herself. She is the highest-paid female athlete on the planet and yet her work-rate is still off the charts."

"I started with no motor whatsoever. I was just on pause but I guess it's more important how you finish.

"She loves playing on grass and came out firing. I just couldn't get much rhythm but I tried to focus on my game.

"I felt like everything was a little bit slow. I wasn't moving up to the ball. She hit a few short balls. I made errors. I let her play. I didn't feel like there was enough pace on my ball. But I'm happy I really stepped it up in that third set."

Williams, who last won this tournament in 2010, had a much smoother ride in her second-round match against the Hungarian qualifier Czink.

The 30-year-old American blitzed the first set 6-1 in 20 minutes and, though Czink put up more of a fight in the second, Williams never left second gear to set up a tie against 2008 Wimbledon semi-finalist Zheng who beat Aleksandra Wozniak 6-4 6-2.

Serena Williams won 37 of 44 points while serving, including 27 of 28 on first serves, and never faced a break point.

"As the tournament goes on, you tend to play a little better," said Williams, who conceded just seven points on her own serve.

"It was great to be back on Centre Court. It's amazing and I served really well.

"Serving wise it was definitely better, more consistent. So it's something to be happy about.

"I feel really good physically, but I'm just always wanting to be so perfect that sometimes I want to do too much. That's something I'm still working on."

Second seed Victoria Azarenka, who reached the semi-finals last year, coasted into the third round with a 6-2 6-0 victory over Switzerland's Romina Oprandi.

The Belarusian will now face either Spain's Anabel Medina Garrigues or Jana Cepelova of Slovakia in the third round.

Ninth seed Marion Bartoli, who lost to Venus Williams in the 2007 Wimbledon final and won the title in Eastbourne last year, lost her second round match against Mirjana Lucic of Croatia.

Lucic, who as a 17-year-old was the lowest-ranked player ever to reach a Grand Slam semi-final back at Wimbledon 1999, beat the Frenchwoman 6-4 6-3.

Later in the day, Williams teamed up with sister Venus to thrash Vesna Dolonc and Olga Savchuk 6-0 6-3 in the women's doubles first round.