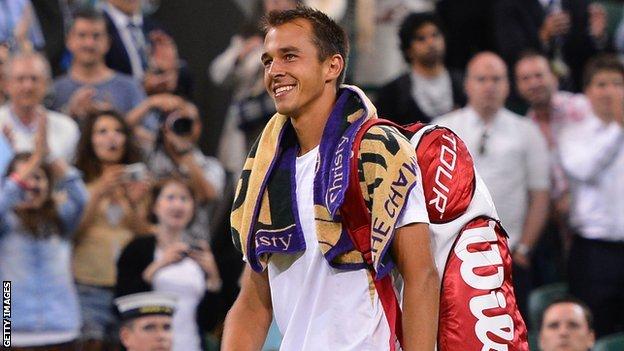 BBC Sport takes a closer look at the unheralded Czech player who dumped the Spanish world number two out of the tournament in the second round.

His career-high ranking is 65, which he achieved in August last year after reaching the quarter-finals of a Challenger tournament in San Marino.

Rosol's first-round win over Ivan Dodig was his first victory at Wimbledon.

It was the first time the Czech has played in the main draw after losing in the first round of qualifying in each of the last five years.

Yet, after play was stopped for more than 40 minutes while the roof was closed, there was no sign of the pressure hindering his hot streak of form.

Instead Rosol surpassed even the standards he had set in the previous four sets.

Thumping winners flowed even faster from his racquet and his serve landed with even greater frequency as he remained resolutely unruffled by the Centre Court clamour around him.

His previous form gave few hints that Rosol had such a performance within him.

He had never won a match in the main draw at either the Australian Open or the US Open.

His best grand slam performances have come at the French Open where he reached the third round in 2011 and lost to Juan Monaco in the second round last month.

Rosol had never played a professional match on grass before the Aegon Championships at Queen's Club earlier this month, where he beat Victor Hanescu and Marcos Baghdatis and then lost to eventual champion Marin Cilic.

It said something for the standing of Rafael Nadal's conqueror when British player Anne Keothavong told her followers on Twitter: "I had no idea who Lukas Rosol was before this evening but I certainly do now."