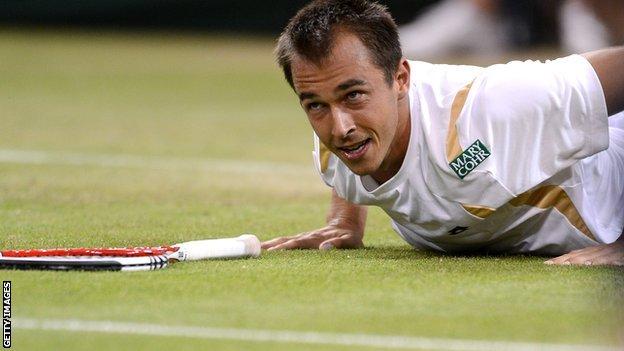 I've never seen a performance like that in those circumstances.

Lukas Rosol didn't make any errors. It was a freak performance. It didn't matter who was at the other end. Nadal was doing all he could to stay in the rallies and make life difficult but Rosol was too good.

He was better than Nadal on the day. It wasn't as if Rafa lost the match. Rosol came out and hit winner after winner. He thoroughly deserved it.

Every opportunity, every first serve, every forehand and every backhand, Rosol was hitting it as hard as he can.

With his technique, he hits the ball very flat and it goes through the court quickly but your margin for error is so much smaller.

It was almost like he didn't give himself too much time to think about the consequences. He was just so consumed by the process of hitting it as hard as he could.

He served it out like a seasoned campaigner. At the end Rosol was just in shock. He was as surprised as anyone at how he was able to sustain that level.

It's just amazing that we don't know more about him, that he could come in and play this kind of tennis.

That was only his 19th win on tour, which makes it even more incredible. It doesn't make sense but it emphasises the depth in the men's game.

The interesting thing now is what happens in the next round. Rosol plays Philipp Kohlschreiber next. Kohlschreiber beat Nadal in the Gerry Weber Open in Halle last month, and he's a seasoned campaigner and a good player.

Is Rosol going to wake up tomorrow and come in to practise and wonder what just happened?

In today's match he had nothing to lose. In the next round he has, because he's beaten the world number two and he's got an opportunity in the draw. It's going to be interesting to see whether he can back this up.

The only way this match has consequences for Andy Murray is if he gets through to the semis. He's only into the third round. He's got to play Marcos Baghdatis, who's a Grand Slam finalist and a dangerous player himself.

He's got to concentrate on his matches and on the things he can control - his preparation and performance. Then if he gets through to the semis, he knows he won't be playing Nadal. That is a big advantage.