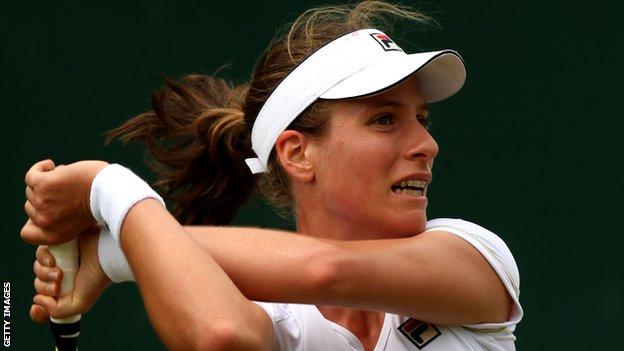 Johanna Konta says she felt honoured to make her Wimbledon debut after being handed a wildcard into the tournament.

The 21-year-old from Eastbourne, who began representing Great Britain last month, was beaten in the first round by American Christina McHale.

Konta told BBC Sport: "It was a great privilege and a real honour. I'm very grateful to have that opportunity and just sad that I wasn't able to convert.

"It was a painful loss but I am taking all the positives from it."

The world number 212, who is the British number five, hopes to learn from her three-set defeat to 30th seed McHale.

"I'm looking to improve on things I need to and move forward," she continued.

"Hopefully I'll take the level I was able to bring out there into the next tournament I play.

"I'll have a rest, a little bit of training and then head to America for some Challenger tournaments.

"There's no substitute for matches in tournament situations so my goal will be to get my ranking higher and the experience will take care of itself."