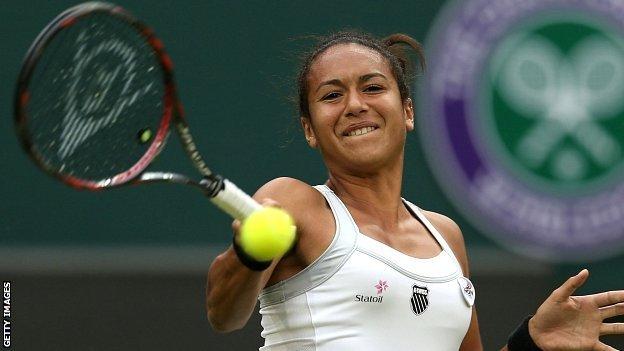 Heather Watson's run at Wimbledon came to an abrupt end as she suffered a 6-0 6-2 defeat by world number three Agnieszka Radwanska in the third round.

The British number four surrendered the first set in 24 minutes and could do little to stop Radwanska, who is ranked 100 rankings places above her.

Watson, 20, ground out a break point in the third game of the second and held to love in the sixth.

"It's been a clinic. The barebones of it are Watson doesn't hit the ball hard enough to trouble Radwanska. But I didn't see one negative ion in her body and she held it together. That's the kind of tennis Radwanska plays week in, week out and why she is the world number three. I'm sure she will go deep into the draw. As for Watson, there are lots of lessons she will take from this."

But the Pole had too much craft and guile and pressed on for an easy win.

Watson had beaten Iveta Benesova on her Centre Court debut in the first round, but neither that, nor her second-round win over American qualifier Jamie Lee Hampton, could prepare her for Radwanska.

"I held it until I got off the court, and then I just let it all out," Watson said of her emotions in the wake of the defeat.

"I didn't make the best start and before I knew it I was a set down.

"She is world number three for a reason, she was hitting the lines on all her serves, exactly where she wanted it.

"My tactics weren't very good. In the first game I was good and aggressive and then I stepped back and tried to rally."

Watson's progress to the last 32 will bring her the consolation of a prize money cheque of £38,875 and a probable return to the top 100.

Radwanska has climbed five rankings places since the start of the season after reaching at least the quarter-finals in 10 of her first 11 events of the year.

She looked accustomed to a higher class of opponent as she dragged Watson to all corners, en route to winning the opening set for the loss of only 10 points.

Watson got closer to Radwanska in the second but could not seriously threaten to take the contest to a decider.

The Centre Court crowd were finally stirred into life as Watson held break-back point in the third and they welcomed her first hold of serve in the next game with loud cheers.

Radwanska raised her game once more though, and a telling drop-shot overhauled Watson's serve again to leave the home fans still waiting for the first British woman to make the fourth round since Sam Smith in 1998.

Watson returned to action later on Friday alongside Ross Hutchens in the mixed doubles, enjoying a 6-4 6-3 win over the Slovak pair of Daniela Hantuchova and Filip Polasek.

Britain's Jamie Murray and American Eric Butorac, seeded 14th, slipped out of the men's doubles competition with a 6-3 7-5 6-4 defeat to the French duo of Michel Llodra and Arnaud Clement.

Clement and Llodra will face British opposition again in their next match if Jamie Delgado and Ken Skupski come through their own second-round tie.