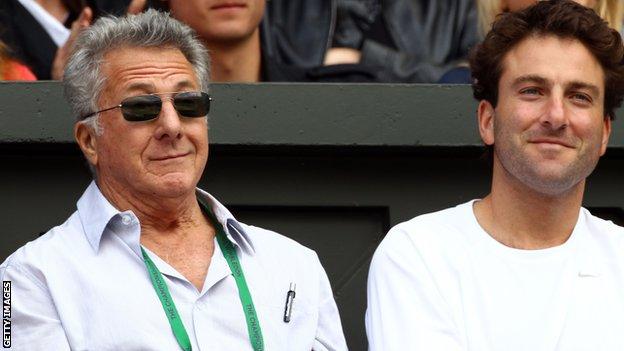 Serena Williams battled her way into the fourth round of Wimbledon with an Oscar-winning actor there to cheer her on.

Dustin Hoffman, star of The Graduate, Kramer vs. Kramer and Rain Man, sat in Serena Williams' box with her family as the four-time Wimbledon champion beat Zheng Jie 6-7 (5-7) 6-2 9-7.

"I knew that he would be there," said the American. "I'm a major fan of his. Who isn't a fan of Dustin Hoffman?

Serena hit 23 aces during her victory over Zheng - a record for a women's match at Wimbledon. She set the previous best of 20 during her semi-final win over Elena Dementieva in 2009

"I was honoured to have him in my box. He's invited anytime."

"I haven't had a chance to talk to him yet, but I probably will.

"I don't know him, I just think he's a great actor. That's more than enough. I mean, come on, 'The Graduate' - he's an award winning actor and seems like a great person."

Everybody wants to be a record-breaker

Roger Federer seems to break records almost by the day, so it is not surprising he sometimes struggles to keep track of them.

That was certainly the case with the obscure landmark one journalist discovered he had set in Friday's five-set win over Julien Benneteau.

Federer, according to the intrepid reporter, has now won 5,459 games in Grand Slam tennis, 21 more than Andre Agassi.

That seemed to tickle the Swiss star, who said with tongue firmly in cheek: "You battle out there. Because I knew it. I knew that that record was on the line.

"That's maybe why I couldn't get it going early, because it's such a big record for me. I thought playing longer might make me really break it."

Kazakh wildcard Yaroslava Shvedova became the first player to win a set at a Grand Slam without conceding a point as she rattled off 24 straight rallies to win the opener of her 6-0 6-4 win over Sara Errani in 15 minutes.

American Bill Scanlon is the only known player to have had a perfect 6-0 set before, in the second set of his 6-2 6-0 victory over Marcos Hocevar of Brazil at a tournament in Delray Beach in 1983.

She failed to notice though and only realised when told by her coach after the match.

"I was just playing every point and every game. I didn't feel like it was every game was 40-0," she said.

"I was so focused in such a zone. I remember like first or second ball of the second set she won. All the people start to like clap and scream. I was like, 'What's going on?'"

Marin Cilic and Sam Querry slugged it out for five-and-a-half-hours before the Croat won 17-15 in the final set. Asked whether he was worried it would head into Isner/Mahut's marathon 70-68 final set type of territory, Cilic said with a smile: "No. I didn't want to put that in my head!"

Lukas Rosol joked that he might soon need a press agent to deal with his new-found status.

The Czech Republic player, who stunned Rafael Nadal in the second round, was the main attraction at the start of play on Saturday, but lost in straight sets to Philipp Kohlschreiber.

"They ask me all these questions," he said. "They call me from Brazil, from this part of world, but also from France.

"I don't have a press agent but I may need one soon. I hope so. I will have to win a couple more matches then I will need one!"

But the 26-year-old believes his victory over Nadal does not have to be a one-off.

"I can play against anyone," he said. "That's what I feel. And also these players now they are going to see they can lose against me."

"I think that the crowd wanted to see more of his great game from the fantastic points. Of course, it was a little bit strange if the loser is going to go back to the court. It never happened before.

"But I think it is respect for playing such a great tournament. I don't know if English people really liked him to kick out Nadal. That's maybe what they were also cheering today. I don't know."

Journalists try to find out if Andy Roddick will return to Wimbledon next year after his defeat by David Ferrer. 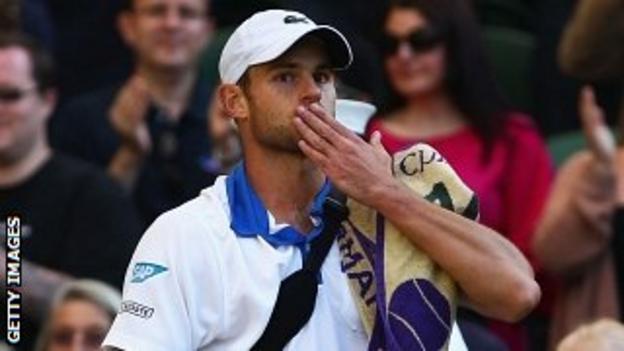 But the American denies that his kiss to the fans as he walked off Centre Court means anything.

"That's just another way of going about it. I understand that journalistic ploy and that's what you're supposed to do.

"I certainly appreciate the softball questions in between, but, again, I don't have an answer for you. I'm not going to be able to give you much else."

And the row over pay rumbles on

After Gilles Simon's comments that equal prize money does not work in sport, the ladies are keen to get their side of the argument across.

Serena Williams: "I don't deserve less because I have boobs and they don't. That's definitely not the case.

"I definitely know my whole life has been dedicated toward being a top athlete, and I shouldn't get paid less because of my sex.

"The conversation's totally over for me. That was so 2000; this is 2012. Who is still thinking like that, like honestly? Get with the program."

Bethanie Mattek-Sands on Radio 5 live after Serena's win: "The house was packed, what an entertaining match. You couldn't call who would win thematch, that's what makes women's tennis so entertaining.

"It's such an open draw and that's what the fans are really appreciating."