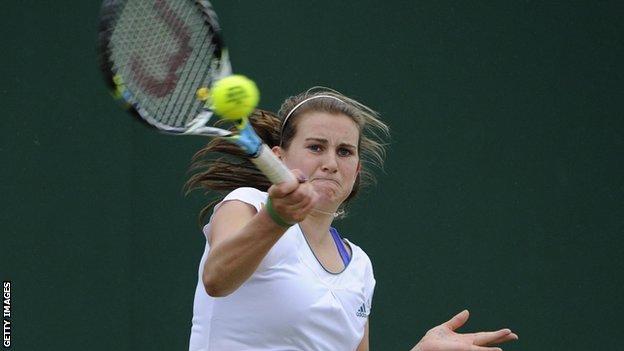 Katy Dunne became the only Brit to reach the girls' second round by beating American 10th seed Chalena Scholl in straight sets, 6-3 6-4.

The 17-year-old, from Hertfordshire, fought back from 3-0 down in the second set before fighting back.

Josh Ward-Hibbert was a set down against Sweden's Elias Ymer when play was suspended due to rain.

Bennett was beaten in three sets by Belgian 13th seed Julien Cagnina, 3-6 6-4 4-6, while Ashley was knocked out by Spain's Pol Toledo Bague.

In the girls' draw Silva lost to Austria's Barbara Haas and Sellyn was beaten by Germany's Antonia Lottner.

If Ward-Hibbert is able to fight back from a set down he will join Liam Broady and Luke Bambridge in the boys' second round.

Scott Clayton, Kyle Edmund, Clay Crawford, Myles Orton and Evan Hoyt have already been knocked out while Lana Rush, Pippa Horn and Harriet Dart failed to win their first-round matches in the girls' competition on Saturday.