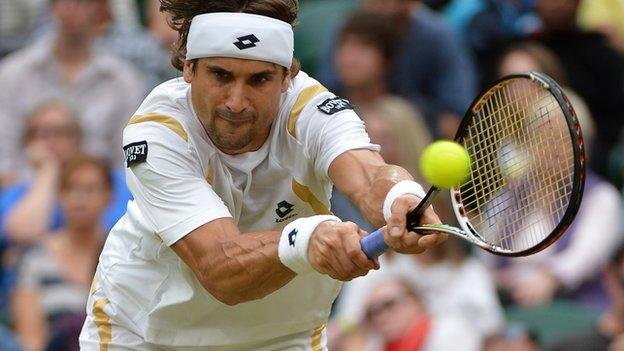 Ferrer completed the 6-3 6-2 6-3 victory over an out-of-sorts Del Potro in one hour and 58 minutes to reach the last eight for the first time.

The Spaniard will be joined by Jo-Wilfried Tsonga, who beat Mardy Fish in four sets.

The fifth seed will meet Philipp Kohlschreiber in the last eight.

The 27-year-old, who has endured five operations in six years, was attempting to become the third American qualifier to reach the quarter-finals at Wimbledon, but was convincingly beaten 6-1 7-6 (7-4) 6-3 in one hour and 55 minutes.

"I didn't feel like I returned well," said Baker, who is expected to break into the top 100 as a result of his three victories at SW19.

"It's been an unbelievable run, I can't be too upset about that but as a competitor I'm pretty frustrated to come so far and not play my best match."

Kohlschreiber's compatriot Florian Mayer beat Richard Gasquet 6-3 6-1 3-6 6-2 and will go on to play Novak Djokovic for a place in the semi-finals.

Ferrer's inspired performance under the Centre Court roof will serve as a warning to Murray, who was defeated by the 30-year-old at the quarter-final stage of the French Open last month.

The world number five, enjoying his most successful season on grass, described his victory over the Argentine as his best performance on the surface.

"I'm very happy," said the Spaniard. "I am trying to improve every day to play better.

"It's going to be very difficult to beat Andy on this surface. I will try to do my best and try to play like I did [against Del Potro]."

Del Potro, who was also seeking to reach the last eight at Wimbledon for the first time, needed treatment on his left knee after slipping on the baseline during the sixth game of the opening set.

But the 23-year-old was already struggling by then, with the on-song Ferrer breaking him in the fourth game.

Ferrer quickly manufactured a two-set lead with breaks in the fifth and seventh games of the second set and concluded matters with a fifth break when Del Potro pushed a volley long to gift game and match to the seventh seed.

The winner of the Ferrer-Murray tie will meet Kohlschreiber or Tsonga in the last four, after the Frenchman overcame a one-set deficit and an injury scare to cruise past Fish.

The American had taken the first set on Monday before rain caused the match to be halted.

Further rain resulted in an hour-long delay on Tuesday, before Tsonga levelled the match in a second-set tie-break, after which he needed treatment.

Still, he was able to win the third set and looked set for victory until more bad weather caused another two-hour delay.