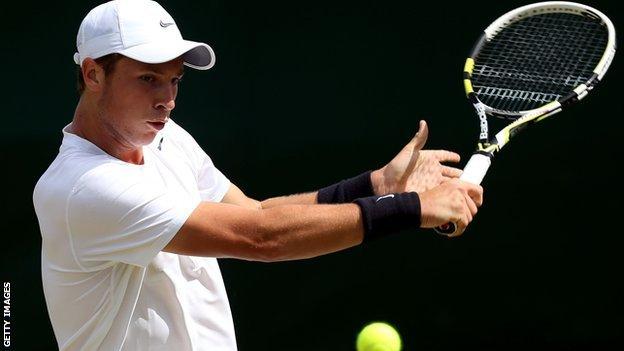 Luke Bambridge and 2011 runner-up Liam Broady were knocked out in the third round of the boys' singles while Katy Dunne lost in the girls' event.

Bambridge saw off Maximilian Marterer in two sets to become the last Briton left in the junior singles on Wednesday after Dunne and Broady were defeated.

But he lost his second match of the day to Australian first seed Luke Saville.

Broady was beaten by Enzo Couacaud while wildcard Dunne could not overcome qualifier Nigina Abduraimova.

Bambridge's first match of the day saw the world boys' number 40, from Nottingham, beat his German opponent in straight sets, 6-3 6-4, to join fifth seed Broady in the last 16.

The 17-year-old had to survive a scare at 5-2 up in the second set before sealing victory when serving for the match for the second time.

Broady crashed out soon after, losing a first set tie-break on his way to defeat by Frenchman Couacaud.

The 18-year-old from Stockport, who is in his last year of competing at junior level, double faulted at crucial times in both sets before poor returns allowed the Frenchman to capitalize and seal a 7-6 (7-5) 6-4 victory.

Junior Davis Cup winner Bambridge then lost a first-set tie-break against world junior number one Saville on Court 18 before an early break of serve sealed the Australian's 7-6 (7-4) 6-4 win.

British hopes in the girls' event were ended as Floundon wildcard Dunne lost in straight sets, despite a fight-back in the second, 6-2 7-5.