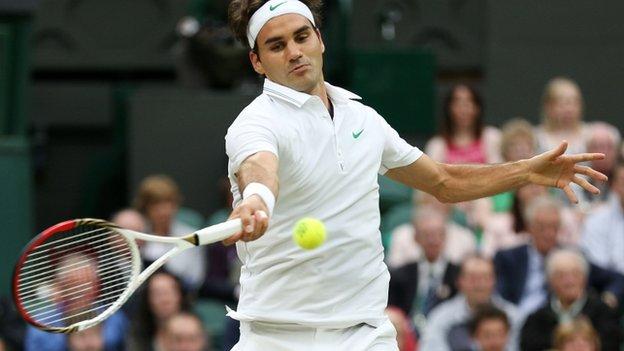 The third seed progressed to his 24th Grand Slam final with a 6-3 3-6 6-4 6-3 win over tournament favourite Djokovic.

It took Federer only two hours and 19 minutes to end the Serb's reign.

The world number three will next play Andy Murray, who became the first Briton to reach the final in 74 years.

"I played a great match. It has been a tough tournament for me. I was able to step it up and get a bit lucky maybe.

"I thought Novak played well too - the first two sets went really quickly and the third was key to the match."

It will be Federer's first Grand Slam final since last year's French Open and his first at Wimbledon since he won his sixth title in 2009.

Recent history was against the world number three, as Djokovic had beaten the 16-time Grand Slam champion in four of their previous five major semi-finals.

But first blood, on the pair's first encounter on grass, went Federer's way when Djokovic, unsure of foot in the early exchanges, slipped at the net when attempting an acrobatic volley for break point. He then hit a tame backhand to give the Swiss the decisive break of the opening set.

Within 24 minutes the third seed had edged ahead and Djokovic looked a shadow of the man who had reached five consecutive Grand Slam finals.

The Serb's movement quickly improved and in the second game of the second set the top seed collected three break points, securing the only break of the set when Federer netted a forehand.

Both players started the third set tentatively, with Federer squandering break point in the second game. But four games later the match erupted into life as exquisite shot-making from the 30-year-old - the highlight a sublime backhand winner down the line - had Djokovic on his heels.

The world number one continued to fetch and retrieve and boldly saved two break points to level at 3-3 before wasting a break point of his own in the ninth game.

I do regret that I didn't play as well as I thought I would, and as well as I played maybe last couple matches. Life goes on. I have to move on

Federer was serving with gusto and the penultimate set once again ebbed his way when Djokovic's nervy overhead smash gifted the Swiss two set points - and this time Federer grabbed his opportunity with a picture-perfect overhead volley.

He celebrated with a manic roar, while the Centre Court crowd rose to their feet in appreciation of the enchanting tennis on display.

Djokovic was rattled and surrendered his opening service game of the fourth and final set with a rash forehand into the tramlines.

The error proved to be fatal and Djokovic himself later admitted he played badly in the last set.

"I dropped in the energy level. I played really a couple of sloppy games, very slow, with no pace, with very low percentage of first serves," said the Serb, who could be usurped by Federer at the top of the world rankings should the Swiss win the final.

"He played well. No question about it. He was the better player. In the important moments he was aggressive, hitting from both sides.

"It's not the first, it's not the last time I lost a match. I lost to a great champion, somebody that has the most Grand Slams in the history of the sport.

"I do regret that I didn't play as well as I thought I would, and as well as I played maybe last couple matches. Life goes on. I have to move on."