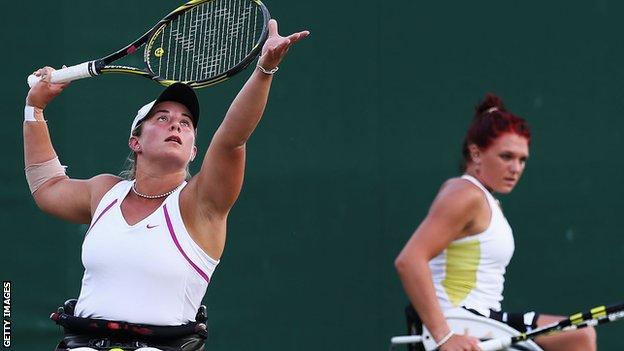 Lucy Shuker and Jordanne Whiley were beaten by Jiske Griffioen and Aniek van Kootin in the final of the women's wheelchair doubles at Wimbledon.

Shuker and Whiley were the first all-British wheelchair tennis pair to make a Wimbledon final, but the Dutch partnership proved too strong.

"We did pretty well just to reach the final," said Shuker.

"It's a shame we couldn't push Jiske and Aniek a bit harder but it was a great experience and we still have a few more tournaments to work on our partnership ahead of the Paralympics in September," added Shuker, a finalist in 2009 and 2010 with Australian Daniela di Toro.

The pair reached the semi-finals last year and 20-year-old Whiley hoped their achievement will have raised awareness of their sport in the UK even further.

"It was my first time in a final at Wimbledon and I won't forget the experience," she said.

"The crowds were amazing and hopefully it's made the British public more aware of what a brilliant sport wheelchair tennis is, whether to watch or try yourself."

Another British pairing, Gordon Reid and Marc McCarroll, lost their third-place play-off to Frenchmen Stephane Houdet and Nicolas Peifer 6-1 7-6 in the men's doubles.