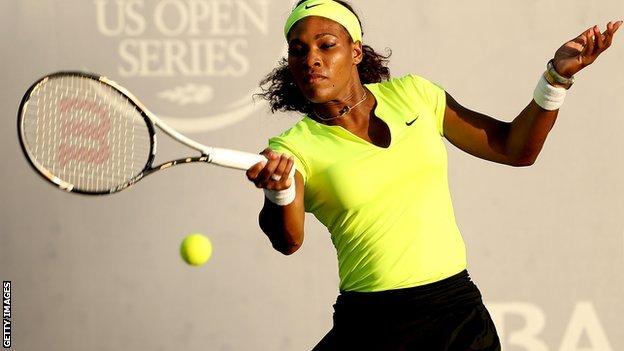 Serena Williams fought off fatigue to reach the semi-finals of the Bank of the West Classic in Stanford with a 6-4 6-0 victory over Chanelle Scheepers.

Williams said she was still feeling the effects of last weekend's Wimbledon win and subsequent flight to California.

"I still have major jet lag," she said. "I'm tired now and ready to sleep, but it felt good out there and to win."

The top seed won a 43-minute first set punctuated by five breaks of serve against her sixth-seeded South African opponent before taking the second without dropping a game.

The 30-year-old American added: "I've been up a long time. I didn't want to take anything, so I was wide awake just like as if I was in Europe.

"I started the match slow and sluggish, but I expected that. I just stayed in there until I began moving better."

Belgian Wickmayer pounced on nine double faults from ex-champion Marion Bartoli to knock the French second seed out with a 6-3 6-2 success.