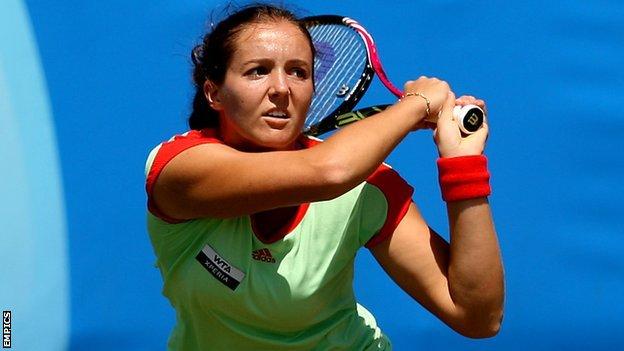 Laura Robson failed to reach her first final on the WTA tour after suffering a last-four defeat by Barbora Zahlavova Strycova at the Italiacom Open.

The Briton took the opening set before problems with her serve let Strycova battle back and win 2-6 7-5 6-2.

Strycova had an injury time out at the start of the second set but recovered to take advantage of the 18-year-old Robson's faltering play.

Reaching the last four is the furthest Robson has progressed on the main tour.

Her last-four appearance should help her improve on her 113th ranking, but she might be ruing a missed chance to make it one stage further in a match where her double faults went into double figures.

Robson had overcome world number 27 Roberta Vinci in the last-16 - the highest-ranked player she has beaten in her career - and 41st-ranked Carla Suarez Navarro. in the quarter-final.

The Briton will be competing at London 2012 on grass at Wimbledon in the women's doubles with Heather Watson.