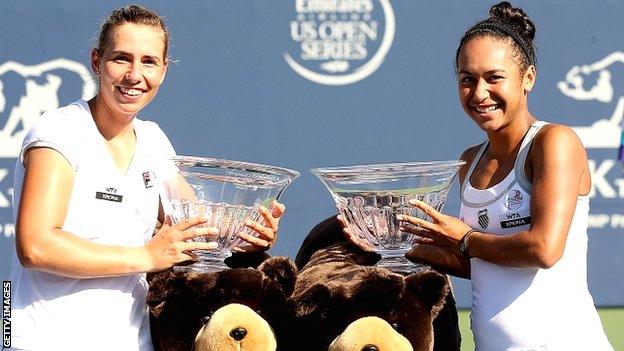 Heather Watson has won her first WTA tour title with a doubles victory at the Bank of West Classic in Stanford and has also become British number one.

She rises to 71st in the singles rankings - making her the lead Briton for the first time - with three compatriots also in the top 100.

Anne Keothavong drops a place to 76th, Laura Robson is the youngest player in the top 100 at a career-high 91st and Elena Baltacha is 100th.

It is the first time Britain has had four women in the top 100 since 12 March 1991 when Jo Durie, Sara Gomer, Sarah Loosemore and Monique Javer formed the quartet.

Rise of the Brits

It was Watson's first title of any description on the WTA tour and serves as ideal preparation for her Olympic campaign.

She will compete for Team GB alongside 18-year-old Laura Robson after the pair were handed a doubles wildcard.

Against King and Gajdosova, Watson and Erakovic broke three times to win the first set before slipping behind early in the second.

They fought back to serve for the match at 5-3, only to let the lead slip and waste two match points on their opponents' delivery.

But Watson and Erakovic held firm in the tie-break to clinch victory.

"It's such a nice feeling getting to the end of the week and being the last ones here," the Briton added.

"We knew it wasn't going to be an easy match today - they're both great players and we knew we would really have to win it, they weren't going to give it to us."

Watson will play this week's WTA event in Carlsbad, California, and then return to the UK.

She has been drawn to face Eleni Daniilidou of Greece in the opening round, while Keothavong meets Erakovic.