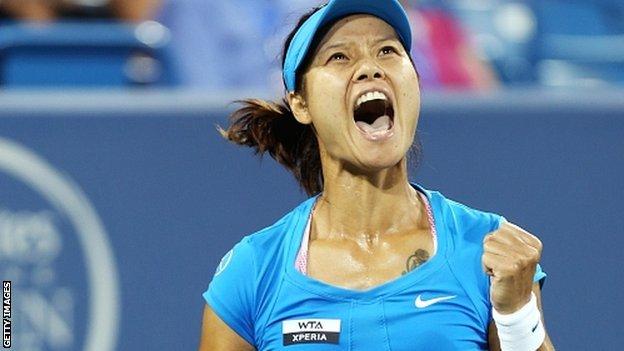 Li Na defeated an injured Venus Williams 7-5 3-6 6-1 to reach the final of the Cincinnati Open and set up a meeting with German Angelique Kerber.

Williams, playing in her first semi-final since the 2010 US Open, was hampered by a back strain.

"I tried to fix it between the warm-up and the match, but it didn't work," said the 32-year-old.

"Right now I don't know why my back hurts, I just know it hurts. After this I'm going to get an evaluation and see what exactly is happening."

Williams will be hoping the injury recedes before the start of the US Open on 27 August, a tournament she has won twice.

Na, the ninth seed, is now a perfect 4-0 in her semi-final matches this year but has yet to win a final.

Last week the Chinese woman lost to Kvitova in the last four the Rogers Cup in Montreal.

Kerber's rise to seventh in the rankings this year has included wins at the Paris indoors and in Copenhagen.