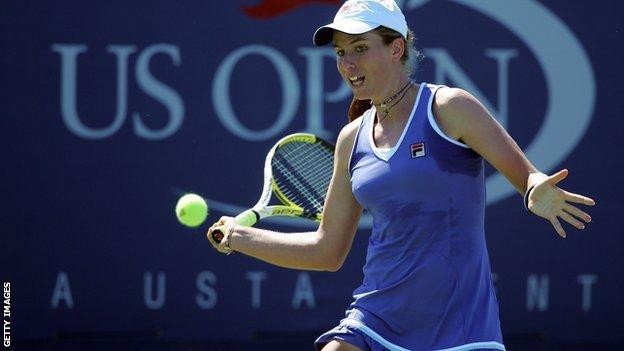 Johanna Konta has qualified for the main draw at the US Open by defeating Zhang Shuai in the third round of qualifying.

Konta, 21, was born in Australia but switched allegiance to Britain in May, having lived in England since 2005.

"It means a lot," she said. "This was my first qualifying appearance in any Grand Slam so I was very happy I was able to convert that into main draw."

Konta in the first qualifying round before beating Japan's Kurumi Nara 7-5 6-2, to set up her match with Shuai - which was watched in front of two-time US Open champion Venus Williams.

She will now play world number 59 Timea Babos, who was herself based in the UK before moving back to her home country of Hungary, in the first-round proper.

Whatever happens in that encounter Konta is guaranteed to move into the world's top 200 for the first time, from her current position of 205.

Fellow female Brits Heather Watson, Anne Keothavong and Laura Robson are all in the main draw by virtue of their rankings.

Keothavong and Watson have tough draws against Angelique Kerber and Li Na respectively, while 18-year-old Robson will be in the unusual position of playing someone younger than her - 17-year-old US qualifier Samantha Crawford.

Meanwhile, Watson captured her second WTA tour title of the summer as she and New Zealand's Marina Erakovic triumphed in the doubles at the Texas Open in Dallas.

The 20-year-old teamed up with Erakovic, 24, to win in Stanford in July, and they followed that up successfully this week.

They were resounding winners in their latest final, winning 6-3 6-0 inside 53 minutes against Latvian duo Liga Dekmeijere and American Irina Falconi.