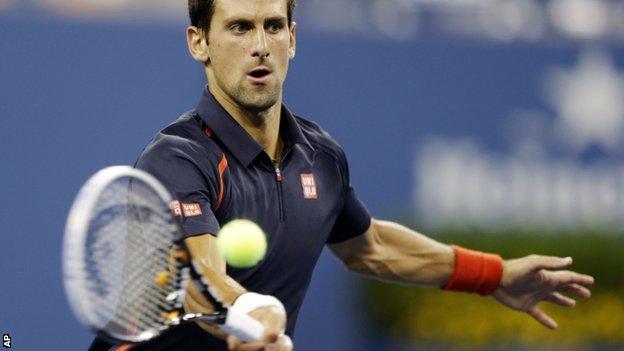 Novak Djokovic made a convincing start to the defence of his US Open crown with an effortless straight sets victory over Italy's Paolo Lorenzi.

Joining him in the second round at Flushing Meadows is fifth seed Jo-Wilfried Tsonga, who defeated Karol Beck 6-3 6-1 7-6 (7-2).

Tomas Berydch progressed with a 7-5 6-3 6-3 win over David Goffin, while Andy Roddick is also through.

Lorenzi broke Djokovic in the opening game of the match, but that was as good as it got for the 69th seed, who had to wait until the start of the third set to win his next game.

Djokovic equalled his most convincing win in a Grand Slam match, conceding only two games at a major tournament for the fifth time in his career.

"My game was great from start to finish," said the Australian Open champion, who will face Brazil's Rogerio Dutra Silva in the second round.

"It was important to be economical with my time on court. I tried to get to the net and stay focused."

Frenchman Tsonga, the fifth seed who reached the quarter-finals in New York for the first time last year, dominated the opening two sets against Beck but found himself trailing 5-3 in the third.

It was not easy today because the weather was hot. I'm happy to go through really quickly

However, he immediately overturned the break of serve before outclassing Beck in the tie-break.

He faces another Slovakian, Martin Klizan, in the second round and remains on course for a quarter-final meeting with Britain's

"I think I played good tennis in the first two sets, and after that I lost a bit of concentration at the beginning of the third," said Tsonga.

"It took some effort to come back. It was not easy because the weather was hot. I'm happy to go through really quickly."

Sixth seed Berdych was similarly comfortable against 21-year-old Goffin. He meets Jurgen Zopp of Estonia in the second round.

David Nalbandian's US Open campaign ended before it began as the Argentine was forced to withdraw because of a rib injury.

"I am really sorry that I cannot participate. I hope I will be back for the Davis Cup tie against the Czech Republic in September," said Nalbandian, who was due to meet compatriot Juan Martin del Potro.