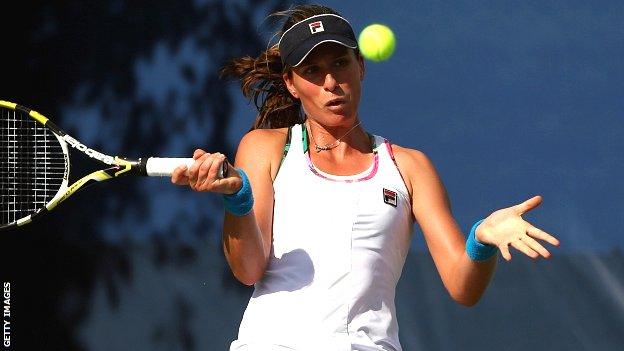 Britain's Johanna Konta posted the first win of her career at Grand Slam level as she beat Hungarian Timea Babos to reach the US Open second round.

Konta, 21, was born in Australia but switched allegiance to Britain in May, having lived in England since 2005.

I'm embarrassed to say I don't know the national anthem yet. I promise I will learn it. Quiz me next time."

"It was probably one of the toughest first-round draws I could have had," said Keothavong.

"She's full of confidence, she's won more matches than anyone else this year and I haven't. I just made too many errors and she's someone who doesn't miss much."

Kerber, a semi-finalist at Flushing Meadows last year, goes on to play Venus Williams after she saw off Bethanie Mattek-Sands 6-3 6-1.

The winner of that match could face Konta in the third round if she beats Olga Govortsova of Belarus.

"I'm happy I'm able to deal with the situations and circumstances so far," said Konta. "I hope I can continue to do so.

"I'm definitely growing as a player. That's mainly to do with my mindset and the way I'm training and also the team I have around me. I've got a very good support system.

"I feel I'm improving, I'm controlling what I can control, it's a gradual process. I'm just happy that I'm just able to get better and better every day."

Konta moved to Britain with her Hungarian-born parents when she was 14 and says she feels "as British as I can feel".

Asked whether she had been forced to learn the British national anthem, Konta replied: "I'm embarrassed to say I don't know the national anthem yet. I promise I will learn it. Quiz me next time."

Britons Colin Fleming and Ross Hutchins also progressed in New York after the 14th seeds beat Blaz Kavcic and Jurgen Zopp 7-6 (7-3) 6-1 in the first round of their men's doubles match.