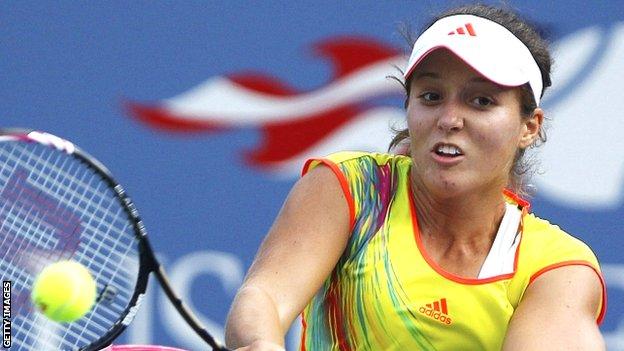 Laura Robson secured the biggest win of her career with a shock victory over former world number one Kim Clijsters in round two of the US Open.

Clijsters was hoping to mark her final event before retirement with a fifth major title and a fourth in New York, where she last lost in 2003.

"A performance like this had been coming from Robson and it was fabulous to watch. We've seen her perform impressively at Wimbledon, and the next logical step was to deliver a consistently brilliant performance against a world-class opponent. Her aggressive style of hitting is so unusual among top players, her movement in and out of the corners has improved immeasurably this year, and the way she kept her composure when the going got tough in the two tie-breaks was so mature. This, at the age of 18, was a top 10 performance."

Na won the 2011 French Open but is unlikely to faze Robson after this incredible result.

"It was such a good atmosphere," said the Londoner. "I didn't have any expectations because she's so experienced.

"I've had so many tough matches against top players that I knew the level was there, I just had to keep it for the whole match.

"Kim has been such a great player for so many years and a role model for all the younger girls coming up."

The world number 89 attacked her 25th-ranked opponent throughout to secure a historic and richly deserved win.

"One of my biggest dreams came true in 2005, winning here," said Clijsters, the 23rd seed. "Every time I came back I was inspired.

"This completely feels like the perfect place to retire. I just wish it wasn't today but there was no doubt in my mind to pick a tournament to play my last singles match.

"Laura played extremely well. I fought and gave it my all but it just wasn't good enough. I look forward to the next part of my life."

Robson's serve was broken in game four of the first set and Clijsters swiftly moved into a commanding position at 5-3.

But that seemed to encourage Robson to go for her shots and two stinging forehands up the line helped her break back.

She pinned Clijsters behind the baseline and hit forehand and backhand winners from all parts to force a tie-break.

Robson continued to pile the pressure on Clijsters, who put a return long to hand over the initiative.

Nerves were evident early in the second set as the Briton sent down a double-fault on break point and Clijsters returned the favour in the very next game.

Both players scrambled out of trouble before a stunning crosscourt backhand gave Robson two match points at 7-6 (7-4) 6-5.

Clijsters held firm with a cool drive volley and ace, yet it was Robson who showed greater composure in the tie-break.

Robson earned a third match point with an unstoppable forehand, and wrapped it up when Clijsters looped a backhand long.

It capped a good day for Britain as Jonathan Marray and Denmark's Frederik Nielsen beat Italians Flavio Cipolla and Fabio Fognini 7-5 6-3 in the men's doubles first round.

Dominic Inglot and Treat Conrad Huey of the Philippines overcame Sam Querrey and James Blake 6-1 7-6 (9-7), while Colin Fleming and India's Sania Mirza were 6-2 7-6 (7-5) winners against Eric Butorac and Andrea Petkovic in the mixed doubles.