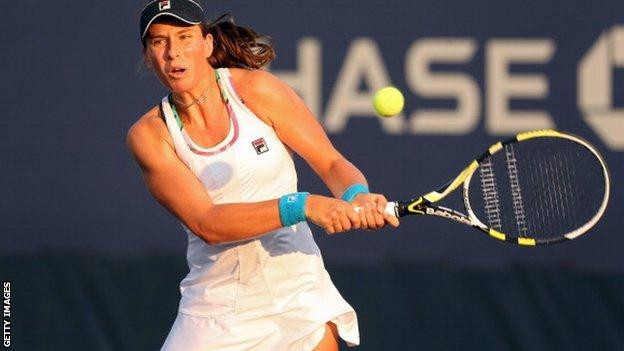 Britain's Johanna Konta squandered a superb opportunity to reach the third round of the US Open, losing to Olga Govortsova of Belarus despite being 5-2 ahead in the deciding set.

The 21-year-old looked on course to join compatriot Laura Robson in round three but was beaten 2-6 6-2 7-5.

Konta twice failed to serve out the match and went on to lose the last five games of the third set.

"There's a lot of positives from this tournament for me," said Konta.

The Australia-born world number 203, who switched allegiance to Britain in May, would have met sixth seed Angelique Kerber had she not wobbled as the finishing line approached.

Konta has nevertheless enjoyed a fruitful tournament, securing the first win of her career at Grand Slam level when she beat Hungarian Timea Babos in the first round.

"My whole trip to the US has been quite full on," said Konta, who came through qualifying. "I've played a lot of matches, which is a good thing. Obviously I would have liked to have made it one more."

"I do not feel, coming off the court, that I let it go. I have to improve from every match, win or lose.

Konta seemed unfazed at facing an opponent ranked 136 places above her in the world rankings, racing to a 4-0 lead in the opening set and comfortably wrapping it up.

A composed Govortsova fought back in the second, but looked in trouble once again when Konta took a 3-0 lead in the deciding set thanks to two double-faults from her opponent.

Konta broke again to earn the opportunity to serve for the match. She could not close it out, however, as Govortsova responded by twice breaking the Briton's serve to seal victory.