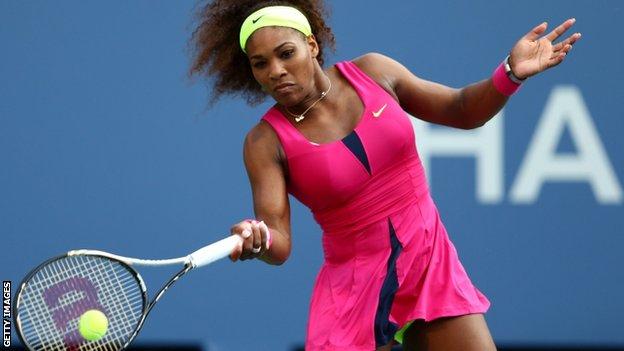 Fourth seed Serena Williams eased into the third round of the US Open after a straight sets victory over Spain's Maria Jose Martinez Sanchez.

The Wimbledon and Olympic champion took an hour and 22 minutes to secure a 6-2 6-4 victory over the unseeded Sanchez.

But former champion Venus Williams is out after being beaten 6-2 5-7 7-5 by Angelique Kerber in an epic encounter.

Second seed Agnieszka Radwanska fought back from a set down to beat Carla Suarez Navarro of Spain 4-6 6-3 6-0.

Serbia's Ana Ivanovic also progressed to the third round with a 6-2 6-2 victory over Sweden's Sofia Arvidsson.

Ivanovic will face 19-year-old Sloane Stephens, the youngest player in the women's top 50, after the American beat Tatjana Malek of Germany 5-7 6-4 6-4.

Five-time Wimbledon champion Venus Williams said she "felt American for the first time" at her home tournament, such was the support she received on Arthur Ashe Stadium.

Williams battled back from a set down in front of a patriotic crowd but Germany's Kerber squeezed through after two hours and 45 minutes under the floodlights.

"This is the first time I've ever played here that the crowd has been behind me like that. I've waited my whole career to have this moment and here it is," said Venus.

"It was awesome. It felt like winning gold. It really meant something. I'm looking forward to having that support in doubles and next year as well."

Venus double faulted and netted a simple volley to gift Kerber a break of serve in the penultimate game and the sixth seed will now play Olga Govortsova for a place in the fourth round.

"Everybody was against me but it doesn't matter, it was such great support," said Kerber, who has now beaten Venus three times this season.

"I just tried to focus on me and fight for every point until the last one. I'm very happy to be in the third round."

But she did enough to maintain her unbeaten record over the Spaniard, producing six aces and winning 89% of points on her first serve, to set up a meeting with Russia's Ekaterina Makarova.

"I wasn't really happy with the way I was playing," said Serena, who had to recover from a break down in the second set. "I just wasn't happy out there in general. I think I woke up on the wrong side of the bed."

Jelena Jankovic will play second seed Radwanska in round three after the former world number one beat Lara Arruabarrena-Vecino 6-4 6-2.

Fourteenth seed Maria Kirilenko of Russia will meet Andrea Hlavackova of the Czech Republic after a 6-3 6-2 win over Hungary's Greta Arn.