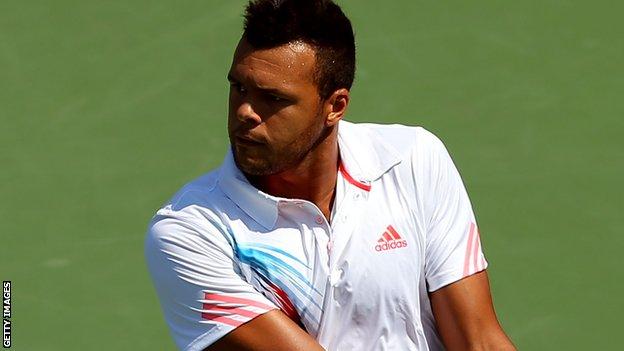 The Slovakian, ranked 52 in the world, had 19 break points against Tsonga, who reached the quarter-finals in 2011.

There was no such trouble for world number one Roger Federer who beat Bjorn Phau 6-2 6-3 6-2.

Fifth seed Tsonga was expected to meet Murray in the quarter-finals.

"I was not in good shape," said the Frenchman. "I didn't play good tennis.

"It seemed like I couldn't hit the ball hard enough to put my opponent out of position. I don't really know why it was like this, but sometimes it happens with me.

"I'm disappointed but it's tennis. Sometimes you win, sometimes you lose. Of course, it's always sad when you lose but I will wait for another good moment. I will forget it."

I feel great. I'm very happy. I think it's my best result in my career.

The 23-year-old Klizan, who lost to Britain's Dan Evans in the Davis Cup earlier this year, will play 32nd seed Jeremy Chardy in the third round and was understandably overjoyed to have beaten Tsonga.

"He's number six in the world and I beat him," he said. "I think it's my best result in my career and I'm looking forward to playing Saturday in the third round. There is a chance to win again."

Federer remained on course for a record sixth US Open title with a 90-minute victory over Germany's Phau.

Both players produced some exquisite shots but it was the top seed who came out on top, finishing the match with 15 aces and 44 winners.

America's Mardy Fish bounced back from a two-set deficit to beat Russia's Nikolay Davydenko 4-6 6-7 (4-7) 6-2 6-1 6-2, creating a new US Open record in the process by becoming the 10th player at this year's tournament to recover from two sets down.

Fish's compatriot James Blake overcame Spain's Marcel Granollers 6-1 6-4 6-2 and will play Milos Raonic in the third round after the Canadian beat Paul-Henri Mathieu of France 7-5 6-4 7-6 (7-4).