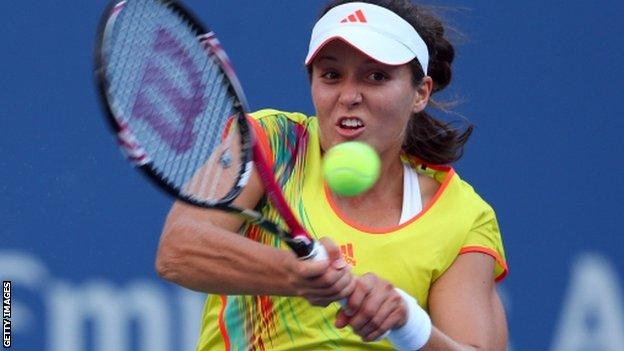 Laura Robson will hope to become the first British woman to reach the fourth round of a Grand Slam in 14 years when she plays former French Open champion Li Na at the US Open on Friday.

She's playing extremely well at the moment. She just won Cincinnati. I have a really tough match

The 18-year-old will play Li at 1600 BST on Louis Armstrong Stadium.

But ninth seed Li is in fine form and has already knocked out British number one Heather Watson in New York.

Teenager Robson, the youngest player inside the top 100, admits her opponent is in "great form" but hopes compatriot Watson can pass on any insight she gained after being overpowered 6-2 6-3 by the 2011 French Open champion in the first round.

"I'm going to have a little chat to Heather and see what her thoughts were seeing as they played each other first round," Robson said.

"She's playing extremely well at the moment. She just won Cincinnati. I have a really tough match."

Should the former junior Wimbledon champion exceed expectations at Flushing Meadows by beating Li then she will become the first British woman since Sam Smith at Wimbledon in 1998 to reach the fourth round of a Grand Slam.

Victory over China's Li would surpass her achievement against three-time US Open champion Clijsters in a match which proved to be the former world number one's final competitive singles match.

But the Belgian will be back in action on Court 17 on Friday to partner Bob Bryan in the mixed doubles against Americans Irina Falconi and Steve Johnson.

All American eyes, though, will be on Arthur Ashe Stadium when Andy Roddick plays Bernard Tomic at about 00:00 BST in what could be the former world number one's final match.

Roddick, US Open champion in 2003, announced he is to retire from the sport at the end of the tournament, saying he "felt like it's time".

He is scheduled second on Arthur Ashe, ahead of Maria Sharapova's third-round match against American Mallory Burdette.