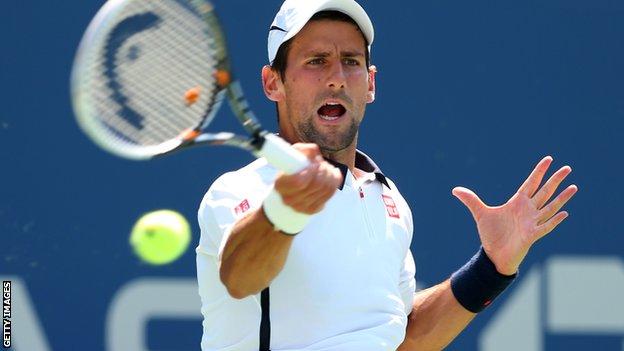 Novak Djokovic continued the defence of his US Open title with a routine straight-sets victory over Brazil's Rogerio Dutra Silva.

Djokovic has spent less than three hours on court in winning his first two matches, having eased past Italy's Paolo Lorenzi on Tuesday.

The Serbian said: "I didn't know much about my opponent; I'd never seen him play.

"Even if the scoreline doesn't indicate it, it was a tough match. I played well from the start to the end."

Roddick, who announced this week that he will retire at the end of the tournament, was cheered by a patriotic New York crowd when he walked on court at Arthur Ashe Stadium.

The spectators were on their feet at the end of the match, applauding the former world number one's dominant 87-minute victory over Australian teenager Tomic.

Roddick admitted he struggled to control his emotions when he watched a television feature about his career before the match.

"It got to me a little bit. I had to get away from that," said the 30-year-old, who hit 10 aces and 24 winners to book a third-round meeting with Italy's Fabio Fogini.

"That was a different kind of nerves than I've had before."

Tomic was accused of not trying by seven-time Grand Slam winner and TV commentator John McEnroe, and became involved in an angry exchange with a journalist at the post-match news conference.

But when pressed, he responded: "That's how I play. If you think that's that, it's up to you. What is your name?" When the reporter told him, Tomic replied: "I'll remember you."

2003: Wins US Open and becomes world number one

2005: Wins Queen's but is beaten in Wimbledon final

2009: Loses to Federer in Wimbledon final

However, the home fans at Flushing Meadows were lifted by a second-round win for American college champion Steve Johnson.

He will play Richard Gasquet, the 13th seed, in the third round after the Frenchman beat Bradley Klahn 6-3 6-3 6-1.

John Isner was another American to progress, the ninth seed negotiating a second-set wobble to overcome Jarkko Nieminen 6-3 6-7 (5-7) 6-4 6-3.

Meanwhile, Wimbledon champions Jonathan Marray and Frederik Nielsen were knocked out of the men's doubles.

Britain's Marray and Denmark's Nielsen, the number 11 seeds, lost 6-1 6-7 (6-8) 6-4 to Jesse Levine of the United States and Marinko Matosevic of Australia.