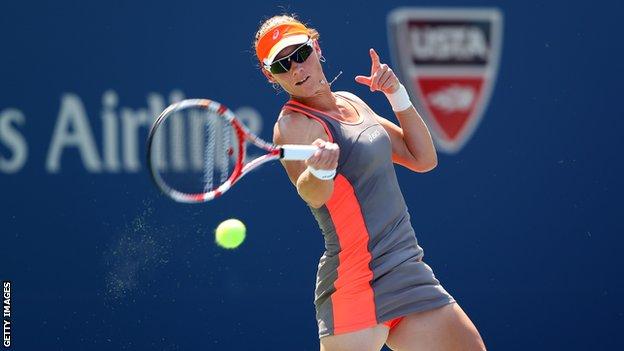 And Petra Kvitova, the 2011 Wimbledon champion, earned a 6-4 6-4 win over France's Pauline Parmentier.

Stosur, who has not won a title of any description since beating Serena Williams in the final at Flushing Meadows last year, admitted that it took her a while to find her rhythm against Uzbekistan-born American Lepchenko.

She said: "I think once I got that first set then I maybe relaxed a little bit more.

"Once I got that break and then started to maybe see what was going on a bit more, it became a little bit easier for me."

Top seed Azarenka, who has lost six games in her first three matches at Flushing Meadows, will play Anna Tatishvili for a place in the quarter-finals.

The Belarusian lost merely seven points in the first set and thanked the New York fans for their support.

"I think you guys inspired me to play my best tennis. It's an incredible atmosphere and energy," said the Australian Open champion.

"I always wanted to play here, I've watched on TV but it felt really different. It was amazing."

The Russian said: "She's got a big solid game from the back and I wanted to take that away from her.

"Of course I would have loved to have served a little better in that second set. I gave her that break but overall it was pretty solid. Considering the conditions, I thought I served good and placed the ball well."