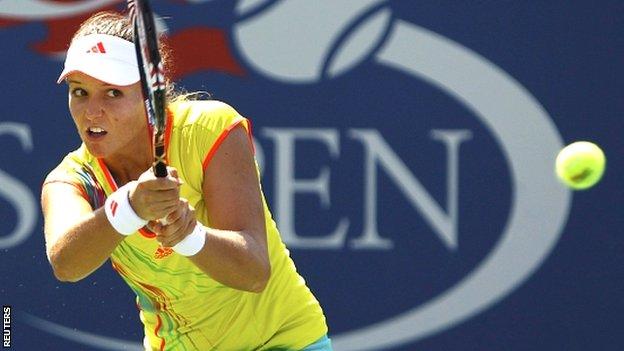 Laura Robson became the first British woman to reach the fourth round of a Grand Slam in 14 years by beating China's Li Na at the US Open.

Robson, who beat Kim Clijsters in the last round, will face defending champion Sam Stosur of Australia next.

"I knew if I kept sticking with [Li] and playing my shots it might pay off, and it did," Robson said.

"I had a few break points early on and I gave them up with some average returning, so when I got a chance I knew I had to go for it."

Robson is the first British woman to make a Grand Slam singles last 16 since Sam Smith reached the fourth round at Wimbledon in 1998.

The teenager had never previously been beyond the second round at a Grand Slam, but had already made headlines at Flushing Meadows by ending the singles career of retiring three-time US Open champion Clijsters in round two on Wednesday.

Her performance against Li attracted attention from footballer Wayne Rooney, who took to Twitter to declare how impressed he was, but called her 'Laura Robinson' - later blaming the mistake on his phone.

"It's great that he watched, even though he got my name wrong. The more people that watch, the better. Maybe a few people a bit younger than me have seen his tweets and said, 'I want to play a bit of tennis now'."

Against Li at Louis Armstrong Stadium, Robson came out on top in an error-strewn opening set, clinching it with the crucial break in game 10, the third time the Chinese number nine seed had been broken in the opener.

Robson also got an early break in the second set, but Li - who beat British number one Heather Watson in the first round - broke straight back and then won a tie-break to force a decider.

Robson's breakthrough in the final set came after a controversial line call went against her at break point on Li's serve at 2-2.

The Briton looked to have hit a winner, only for the call to be overruled by umpire Louise Engzell. Robson successfully challenged the overrule, but when the point was replayed Li won it.

However, Robson forced another break point and this time seized it to take a 3-2 lead, then broke serve again before serving out for the match.

A disappointed Li said: "She has a huge first serve. But it's not like I didn't have a chance. I was making a lot of mistakes in the whole match, so I gave her a lot of free points."