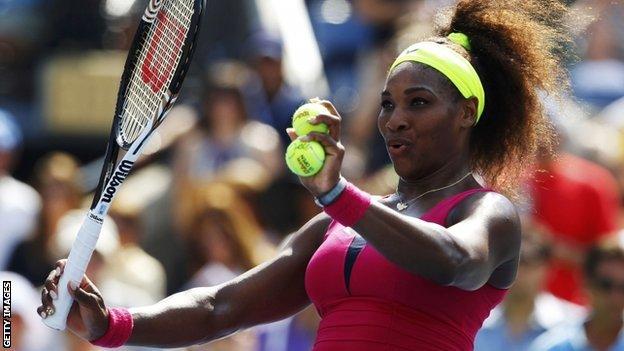 Serena Williams eased into the fourth round of the US Open with a straight sets victory over Ekaterina Makarova.

The American, who has won this event three times, exacted revenge for her Australian Open thrashing by Makarova earlier in the year with a 6-4 6-0 win.

Fourth seed Williams broke the Russian to win the first set and raced through the second to win in 80 minutes.

"I was feeling like I was melting there," said Radwanska, who will play Italy's Roberta Vinci in round four after the 20th seed knocked out 13th ranked Dominika Cibulkova 6-2 7-5.

Jankovic had 37 unforced errors in the match to Radwanska's 15 and the victor conceded her patience had paid off, adding: "I survived the match. In the second set, I was just better for a couple of points.

"With the hot conditions, you really have to fight more yourself than against the opponent."

Williams, 30, opened strongly against Makarova but the Russian battled hard, holding serve the first four times, but after losing the first set she wilted.

"She beat me in Australia, so I knew I needed to play better going into today and I definitely felt I played better," added Williams, who won the US Open in 1999, 2002 and 2008.

"Mentally I am just going with the flow, this is my home crowd and it's hard not to be excited to play here, being an American and playing in New York."

Williams will play Maria Kirilenko in round four after the Czech Republic player knocked out Russian 14th seed Andrea Hlavackova 5-7 6-4 6-4.

German sixth seed Angelique Kerber will play Italian 10th seed Sara Errani for a spot in the quarter-finals after a 6-1 6-2 victory over Olga Govortsova of Belarus.

Serbia's Ana Ivanovic, seeded 12th, is also through to the last 16 after overcoming American Sloane Stephens in three sets 6-7 (4-7), 6-4, 6-2 and will face Bulgarian Tsvetana Pironkova.