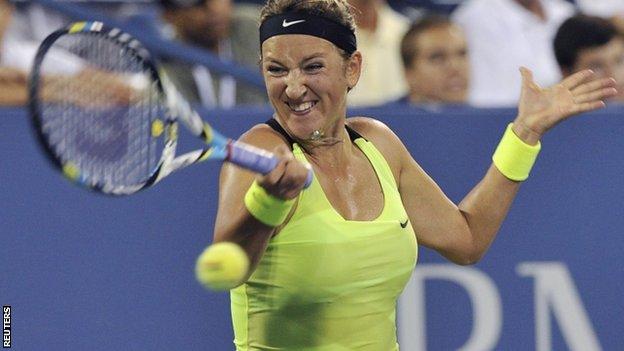 Top seed Victoria Azarenka reached the quarter-finals of the US Open for the first time with an impressive straight sets victory over Anna Tatishvili.

The world number one needed just 82 minutes to win 6-2 6-2 and set up a last-eight meeting with reigning champion Sam Stosur.

Sharapova looked in trouble at 2-0 down in the deciding set against her Russian compatriot before rain halted play on Arthur Ashe Stadium.

They resumed an hour and 13 minutes later with Sharapova finding her form to break Petrova twice before serving out the win.

The world number three admitted afterwards that a chat with her coach Thomas Hogstedt during the break made the difference.

"He told me to get my act together," she said.

"That was quite important. At the beginning of the third I was a bit sloppy. He just told me to fight and that was what I did.

"I'm so happy to be back in the quarters. It's been so many years, and it's a great stage to be at."

It has been my dream to play well in New York. It's one of the best matches of my season.

It was rather more straightforward for Azarenka, however, who has lost just 10 games on her way to a fifth quarter-final in seven Grand Slams.

The Australian Open champion produced 22 winners and clinched seven of 10 break points in a ruthless display over her Georgian opponent and will be confident of reaching the last four.

Azarenka has not lost a set in six previous meetings against Laura Robson's conqueror Stosur, the most recent victory coming last February in Doha.

"What she did here last year was absolutely amazing. It's definitely going to be a very difficult match.

"As defending champion she's going to be really motivated. I'm motivated as well. It's my first quarter-final at the US Open and I'm really looking forward to it."

Eleventh seed Bartoli said she was "speechless" after beating 2011 Wimbledon winner Kvitova, the only woman to have advanced to the quarter-finals of this year's first three Grand Slams.

In a match where there were 12 breaks of serve, 2007 Wimbledon runner-up Bartoli won 12 of the last 13 games to progress to the last eight in New York for the first time in 11 attempts.

"It has been my dream to play well in New York. It's one of the best matches of my season. I was moving so well. I was seeing so well on the court. I'm so happy," said the 27-year-old.