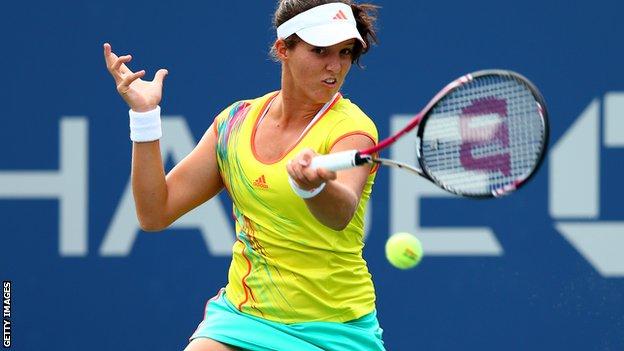 Laura Robson is out of the US Open after a 6-4 6-4 fourth-round defeat by defending champion Sam Stosur.

"Still we learn more with every match about Laura Robson and her world-class potential. Any player who digs in, deep in a second set, to save eight match points has guts. A year ago I'm not convinced she would have run every ball down as if her life depended on it. A set and a break down, she still clearly believed she could win. Every future champion can work on their forehands and backhands but none can exist without heart. Robson has beaten two world-class players and lived with another. Enormously promising for a career which has only just begun. "

The 18-year-old, aiming to become the first British woman to reach the quarter-finals of a Grand Slam for 28 years, produced a spirited display.

However, she was unable to capitalise on two break points at 4-4 in the first set, which she lost on a double fault.

Stosur will face world number one Victoria Azarenka or unseeded Georgian Anna Tatishvili in the quarter-finals.

The Australian said: "I think Laura is a very good player. She's very young and she's got a lot of years ahead of her.

"She hits the ball great and thinks things through. She's one to watch."

No British woman had reached the last eight of a Grand Slam since Jo Durie at Wimbledon in 1984, but Robson raised hopes with her performances at Flushing Meadows.

The world number 89 knocked out two former Grand Slam champions, Kim Clijsters and Li Na, on her way to the fourth round.

She started aggressively against Stosur, winning an early break, but let slip a 40-15 lead in her next service game as Stosur broke back.

She made the most of that escape as Robson faltered on her serve to lose the set.

Robson failed to take any of the three break points she engineered at 1-1 in the second set, and was broken again when sending a looping backhand long.

Frustration looked to be creeping into Robson's game, but she showed great spirit to save five match points on her own serve at 5-2, then survived two more to break back in the following game.

Stosur had two more match points on the Robson serve at 5-4, taking the second to secure victory as the British teenager sent a forehand long.