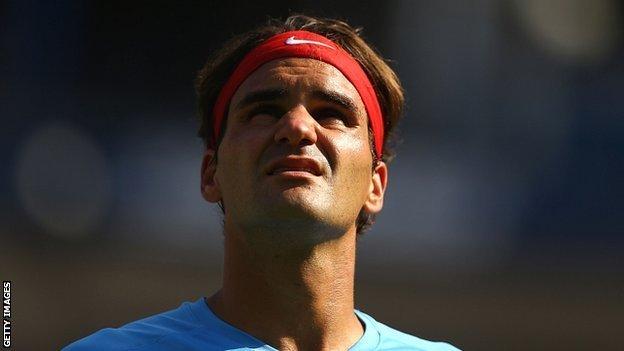 World number one Roger Federer made the US Open quarter-finals without hitting a ball after his opponent Mardy Fish withdrew for health-related reasons.

Five-time champion Federer will face Czech sixth seed Tomas Berdych for a place in the semi-finals in New York.

Fish was out for about two months earlier this season because of an accelerated heartbeat, and he had a medical procedure in May.

Fish's agent, John Tobias, said: "We are not 100% sure what the issue is and if it is related to his previous issues."

"I was reluctant to [withdraw] but am following medical [advice]," said Fish in a statement.

"I had a good summer and look forward to resuming my tournament schedule in the fall."

"I am really sorry for Mardy," said Federer, who has now reached 38 Grand Slam tournament quarter-finals, three shy of the record 41 achieved by Jimmy Connors. "I just want to wish him a speedy recovery. We all want to see him back on tour soon.

"It will be a tough match against Tomas. We have played many times in the past and he has always been a tough opponent. I will have to continue to serve well and dictate the points."