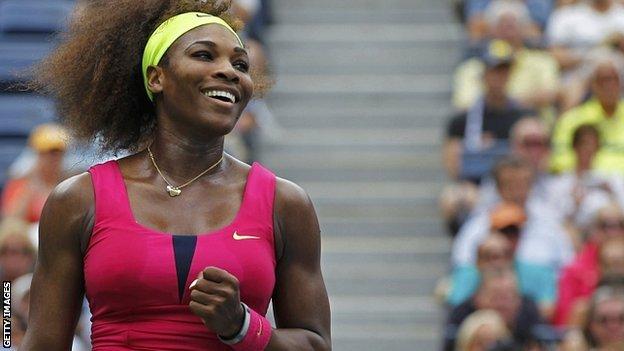 Serena Williams thrashed Andrea Hlavackova 6-0 6-0 to reach the quarter-finals of the US Open and cement her position as favourite.

Three-time champion Williams hit 31 winners and made only seven unforced errors to set up a clash against Serbia's Ana Ivanovic.

Errani reached the quarter-finals at a major for the third time this year by beating sixth seed Angelique Kerber 7-6 (7-5) 6-3.

The 30-year-old Williams said: "She was fighting really hard. If you give people any type of chance, especially in tennis, the match is never over until you shake hands. There is always a comeback available.

"I didn't want to give her that opportunity. She was getting so pumped up and she never gave up. I thought that was really incredibly positive."

Hlavackova, the world number 82, won only 10 points in the first set and was eventually beaten in 57 minutes.

Ivanovic is into her first Grand Slam quarter-final since winning the 2008 French Open, but Williams has won their three previous meetings.

Later in the day, Serena and Venus Williams were knocked out of the women's doubles, suffering a 6-1 6-4 third-round loss to fourth seeds Maria Kirilenko and Nadia Petrova of Russia.