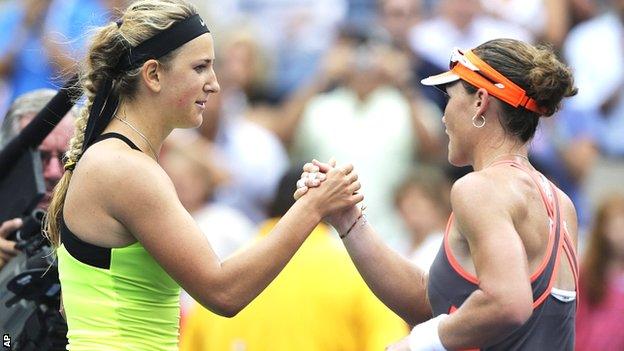 Top seed Victoria Azarenka beat defending champion Sam Stosur 6-1 4-6 7-6 (7-5) to reach the semi-finals of the US Open for the first time.

The Belarusian took the first set in 30 minutes before Stosur started firing winners at will to level the match.

Stosur overcame two breaks of serve to take the third set into a tie-break but was unable to recover from 4-0 down and lost in two hours and 23 minutes.

Azarenka plays either Maria Sharapova or Marion Bartoli next.

Eleventh seed Bartoli led 2006 champion Sharapova 4-0 in the first set when the match was postponed until Wednesday because of rain.

Azarenka's victory guarantees she will stay as world number one at the end of the tournament.

"I'm really looking forward to playing the tough battles I have still in the tournament," said the 23-year-old.

"Being in the semi-finals for the first time is an incredible feeling for me. I definitely don't want it to stop. I really want it bad."

The Belarusian had dropped only 10 games on her way to the last eight and was facing a player she had not conceded a set against in six previous meetings.

Stosur made a poor start and was 3-0 down when a heavy rain shower forced the players off court for more than an hour.

After the resumption she continued to make too many unforced errors and an errant backhand handed the first set to Azarenka.

Stosur broke serve for the first time early in the second and another break in the seventh game was enough to force a deciding set.

Having recovered from two breaks of serve, the Australian had a break point at 5-5 only for her rival to come up with an ace.

Azarenka saw a 5-0 lead in the tie-break become 5-5, but a drop shot and forehand winner closed out the match.

to win her first Grand Slam title 12 months ago and although there was sadness in defeat, the seventh seed took solace in her performance.

"There's always going to be disappointment when you lose in the quarters of the US Open," said Stosur.

"But I'm really pleased with the way I played. It was a really good match and I gave it everything I had."