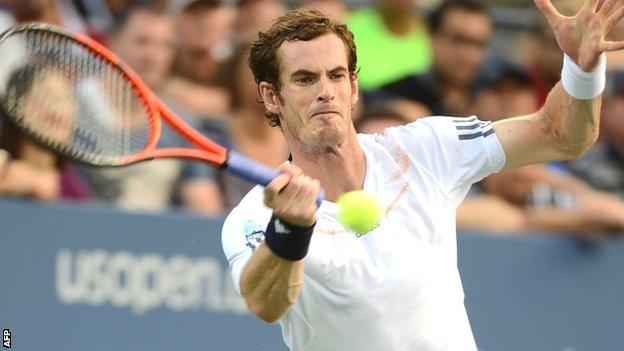 Andy Murray fought back from a set and 5-1 down to overwhelm Croatia's Marin Cilic and make the US Open semi-finals.

"It must have been odd for Murray to go from a full house New York night session to the feel of a behind-closed-doors match.

"Things were flat as a Manhattan pancake when the match started - switched to Louis Armstrong in front of a hardcore few - and Murray's lethargic play wasn't helping.

"But as the Roddick match ended, crowds started to file in and Murray responded, feeding off the extra energy. Crucially, he also started moving his feet and putting pressure on Cilic with deeper groundstrokes.

"The Croatian got tight, spectacularly so when leading 5-1 second set, and the moment Murray levelled the match - impressively from 4-2 down in the tie break - there was only going to be one winner."

The match was switched from Arthur Ashe Stadium to the more compact Louis Armstrong court and Murray struggled as Cilic looked set to cause an upset.

"I've had a lot of tough matches - everyone goes through them," said Murray, who will play his semi-final on Saturday.

"We've seen Rafa [Nadal], Novak [Djokovic] and Roger struggle here. There is pressure on you to perform well, expectations are high and sometimes you're nervous."

Murray had won six of his seven previous meetings with Cilic but that one loss came in the US Open third round on Armstrong in 2009.

Organisers moved their latest encounter to the same arena after two rain delays meant a backlog in the schedule on Ashe.

Some players feel the cleaner surface and closer proximity of stands to the court means it plays quicker and is better suited to big hitters.

That theory was given credence as Cilic opened with a service hold to 15 and then broke Murray to love.

The British number one eventually found some rhythm to strike back for 3-4, only to let Cilic immediately restore his advantage.

Murray threw his racquet to the ground in an outburst rarely seen since he began working with coach Ivan Lendl at the start of 2012.

Cilic served out the first set, landed an early blow in the second and saved three break-back points to lead 6-3 2-0.

The 23-year-old's evening further improved as he forced the double-break and moved to within a game of a two-set lead.

But Murray found some form from deuce in game seven, with an acute forehand winner and ace helping him to 2-5.

Cilic suddenly and inexplicably began missing shots he had been making all evening and another Murray forehand winner recovered one of the breaks before a double-fault from Cilic saw the set levelled at 5-5.

Murray's comeback gathered pace as he recovered from 2-4 in the tie-break to level the match with the help of four Cilic errors.

Near-empty at the start, Armstrong was now filling up nicely and Murray responded with a superb crosscourt backhand to break in game five of the third set.

More Cilic hesitancy made it 5-2 before Murray saved a break point en route to serving out and then breaking in game one of set four.

Cilic's body language was that of a beaten man. After gifting Murray another break, he failed to convert three chances of his own.

It was 5-0 when Murray dispatched a poor second serve with a stinging return. He then sealed victory with a crosscourt backhand.

"He played well at the start," the third seed said. "I was a bit tentative, leaving balls and he was able to dictate points.

"I needed to make a move - and I did that. I kept fighting. He got a little bit nervous at end of the second set, which helped.

"It's a very quick court compared to Ashe. I struggled early on and he made it difficult. I'm happy to come through in the end."