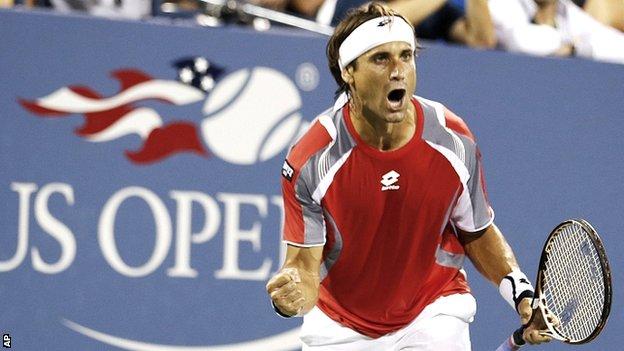 David Ferrer beat Richard Gasquet to reach the US Open quarter-finals, but that was the only men's singles match completed on a rain-affected day nine.

The fourth seed from Spain has still only dropped one set all fortnight after defeating his 13th-seeded French opponent 7-5 7-6 (7-2) 6-4.

This season was the best of all my career. I'm playing consistent all year.

He plays Janko Tipsarevic or Philipp Kohlschreiber in the last eight.

That, along with the two other outstanding fourth-round matches, are scheduled to resume on Wednesday.

Organisers will hope they are finished before the quarter-final between Andy Murray and Marin Cilic, which is third on Arthur Ashe Stadium.

Later on Wednesday, Roger Federer meets Tomas Berdych for the right to face Murray or Cilic in the semi-finals.

The only man from the bottom half of the draw through to the last eight so far is Ferrer, who has now made the last eight at all four of this year's Grand Slams, with his best display a run to the French Open semi-finals.

"I'm very happy for that," he said. "This season was the best of all my career. I'm playing consistent all year."

The Spaniard will face Djokovic in the quarter-finals if the Serbian, who beat Ferrer in the semi-finals in 2007, overcomes Wawrinka.

Roddick, who plans to retire after the tournament, began well in front of his home crowd in the night session, breaking Del Potro in game six and swiftly moving 5-2 ahead.

But he could not serve it out and the pair had just started the first-set tie-break when play was called off.

Djokovic had managed only two games of his match against Wawrinka on Louis Armstrong Stadium, winning both of them.