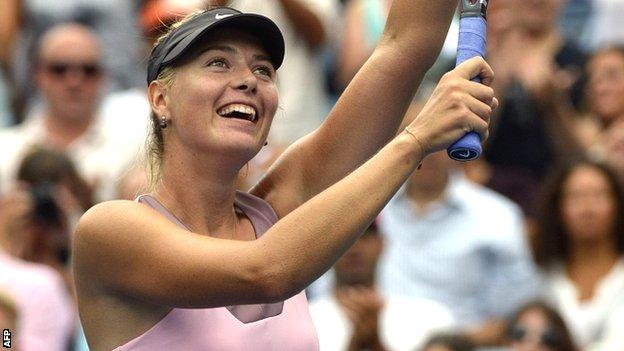 Former champions Maria Sharapova and Serena Williams reached the semi-finals of the US Open in contrasting fashions.

Sharapova and Bartoli resumed on Wednesday with the Russian trailing 4-0 in the first set, which she proceeded to lose following two more breaks for rain.

However, after a see-saw second set, Sharapova levelled the match with her fifth ace before breaking again to lead 2-1 in the decider.

Bartoli, the 11th seed, broke back only for Sharapova to land a major blow in game nine and serve out for the match.

"The rain break gave me a few hours to think about things," said the four-time Grand Slam champion.

"I came out so flat yesterday. She's so tough and she was on fire. But I'm so thrilled to get back to the semi-finals."

It is the first time Sharapova has reached the last four at Flushing Meadows since she won the title six years ago.

Can I win the title? I will tell you in three or four days

And not since her 12 months ago has Sharapova lost a three-set match, winning 12 out of 12 this season.

The 25-year-old, who will next attempt to avenge her in January's Australian Open final.

Williams is through to the semi-finals for the fourth time in five years, courtesy of her 58-minute win over the Serbian 12th seed.

It is the 22nd time she has reached a Grand Slam semi-final, while 10th seed Errani will be playing in only her second. She is the first Italian woman to reach the last four of the US Open.

Williams, who lost last year's final to Australia's Sam Stosur, said: "It's going to be a good match-up. She [Errani] is such a fighter, she's so strong and quick."

The American has only dropped 16 games in five matches and has sent down a tournament-best 41 aces, including 12 against Ivanovic, the 2008 French Open champion.

Errani was playing in her third Grand Slam quarter-final of the year while best friend Vinci was making her last-eight debut at a major.

The pair have won seven doubles titles in 2012, a haul which includes the French Open, but Errani's big-match experience proved decisive.

"It's always hard to play against a friend and it was strange seeing her on the other side of the net," said 10th seed Errani, who has four singles titles to her name this year.

"Can I win the title? I will tell you in three or four days."