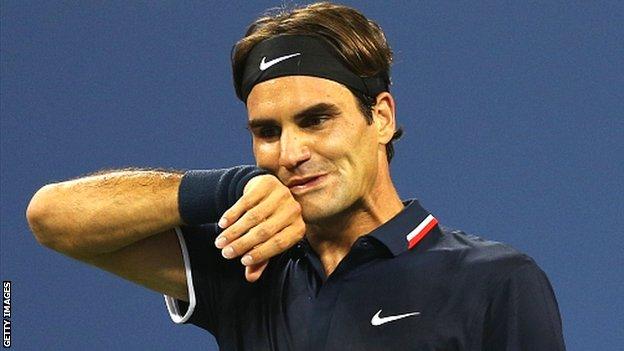 Roger Federer was knocked out of the US Open, suffering a surprise defeat by sixth seed Tomas Berdych, who will face Andy Murray in the semi-finals.

"A huge win for Berdych, who played ferocious tennis in the first two sets and then impressively resisted an inevitable Federer fightback to win the fourth.

"The Czech player was in scintillating form early on with a series of aces and forehands which simply beat Federer for pace. He took the lead in the third but got a little twitchy and Federer started aggressively turning the match.

"In the fourth, the errors came from Federer serving at 3-4 and Berdych, presented with the unexpected opportunity to serve out the match, rediscovered the emphatic play of earlier.

"Federer hardly had a hit in that final game. What a performance."

It is the first Grand Slam semi-final line-up featuring neither Federer nor the injured Rafael Nadal since the 2004 French Open.

"I just didn't come up with the goods tonight," said Wimbledon champion and Olympic silver medallist Federer, who last failed to make the semi-finals of this event in 2003.

"I've got to go back to the drawing board and see what's really a priority. I'm disappointed. I really expected myself to play better.

"I felt good and had such an amazing summer. I really thought I was going to come out and play a solid match. I didn't do that."

The 31-year-old had not played since Saturday but showed few signs of rustiness as he broke Berdych's serve in the opening game.

However, the 26-year-old Czech battled back to force a first-set tie-break and dominated it with a show of brutal shot-making.

Contesting his first US Open quarter-final, Berdych started the second set as he finished the first, breaking Federer for a 2-0 lead and denying the Swiss a look-in on his serve.

He struck again with an unstoppable forehand for 5-2 and, although Federer immediately recovered one of the breaks, closed out to love at the second attempt.

A swift conclusion was in sight when Federer's serve was broken again at the beginning of the third set, but he finally found some rhythm and drew level thanks to a Berdych double-fault in game six.

Murray for the final?

The crowd roared with delight as Federer punished his nervous-looking opponent, but the Czech regained his composure in set four.

In game eight, Federer saw a forehand sail long off the net cord, handing a break point to his opponent.

Berdych grabbed the opportunity, passing the Swiss at the net to lead 5-3 before serving out the match to love.

"It couldn't be better," said Berdych, who knocked out Federer at the same stage of Wimbledon in 2010.

"There is no better feeling than to play my first night session against Roger and be able to beat him. I really enjoyed it. The crowd were great and I'm really looking forward to the next one."

Earlier in the day, Djokovic cruised into the quarter-finals when Swiss opponent Stanislas Wawrinka retired while trailing 6-4 6-1 3-1.

The second seed now plays 2009 champion Del Potro after he ended the career of Andy Roddick with a four-set win.