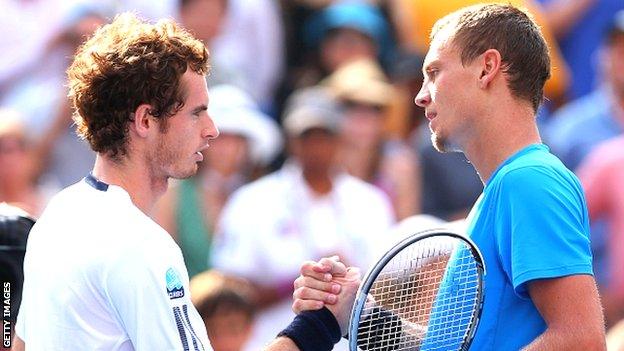 Britain's Andy Murray continued his quest for a maiden Grand Slam title with victory over powerful Czech Tomas Berdych to make the US Open final.

Murray, 25, is through to his fifth major final and second in New York.

"Murray resisted an unexpected fightback from Berdych to secure his place in a fifth Grand Slam final and a second in this increasingly successful summer of 2012.

"The conditions were horrendous. When a couple of chairs blew onto the court in set two, it was hard to know whether to laugh or cry.

"Murray proved his class in sets two and three and was cruising into the final when a break up in the fourth. Then Berdych started middling it again and things were touch and go in the tie-break when he led 5-2.

"Murray's response was superb and, with everything else that's been going on, he'll be relieved to be home and dry and safely in the final."

Murray joins Fred Perry as the only British men to reach multiple US Open finals and will replace Rafael Nadal as world number three when the latest rankings are published on Monday.

His coach Ivan Lendl is the only other player in the Open era to lose their first four Grand Slam finals, but Lendl triumphed in his fifth.

When asked if he would do the same, Murray said: "I hope so. You can never say for sure and I know how tough these events are to win.

"Novak and David are very tough opponents. Anything can happen in these conditions but I'll give it everything I have."

Murray overcame Berdych with a display epitomising the maturity and consistency that have been increasingly evident since he hired Lendl.

He is a far more accomplished player than the one who lost to Roger Federer in the 2008 showpiece, and illustrated that against the man who stunned Federer in this year's quarter-finals.

The result was particularly impressive given Murray had to rally from dropping the first set, with the wind proving troublesome throughout.

"It was brutal," explained the British number one, seeded third. "The ball was moving, stopping, there were chairs flying.

"They were some of the hardest conditions I've ever played in and I come from Scotland, so that's saying something."

Torrential downpours saw play delayed by 90 minutes, and when it did begin both men looked far from comfortable.

Olympic gold medallist Murray struck early for a 2-1 lead and thought he had saved an immediate break-back point.

But his cap blew off his head while playing the winning shot and after Berdych argued the decision to award Murray the point, umpire Pascal Maria called a let and the Czech won the replayed point.

That gave Berdych the momentum and he held serve for 6-5 before breaking with a huge forehand to secure the opening set.

An evidently riled Murray put his anger to positive use, breaking to love in game one of the second set with the help of a stunning backhand stop volley from down at his feet.

He again dismantled the Berdych delivery to move 4-1 ahead and secured the next five games to assume a commanding position.

Berdych appeared to have completely lost his focus and his radar, firing a forehand long to gift Murray a two-sets-to-one lead.

A conclusion was in sight as Berdych skewed a forehand wide to hand over the initiative at the beginning of the fourth set.

Yet Murray wasted two chances for the double-break in game four and that gave his opponent renewed hope, Berdych hitting straight back and going on to force a tie-break.

A deciding set seemed likely when the Czech moved to 5-2 an ace, only for Murray to battle his way into contention and seal victory thanks to errors number 63 and 64 from the Berdych racquet.

538 comments
Back to top
unknown