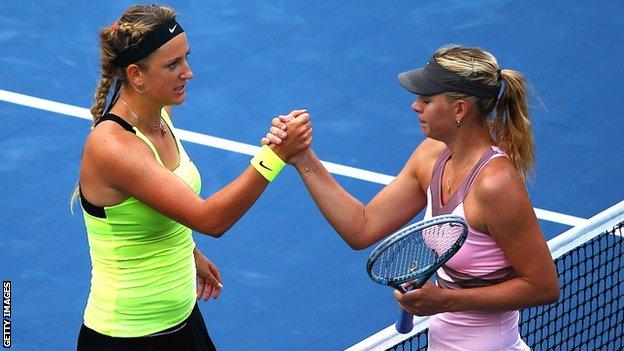 In a noisy but high-quality encounter, the world number one came from a set and a break down to stun 2006 champion Sharapova on Arthur Ashe Stadium.

The Belarusian, who also beat her Russian opponent to lift this year's Australian Open, won 3-6 6-2 6-4.

"Azarenka's comeback was so determined, so fuelled by self-belief. Her play at the bitter end, with deep returns and furious line-hitting gave Sharapova little chance.

"The best three players of the tournament were the three Grand Slam winners of the season. But only one can now collect a double major return from 2012."

"To come back was difficult," she said. "Maria is an incredible fighter. She was playing well and I couldn't find my rhythm to hurt her.

"I had to stay focused and when the opportunity arrived to step it up, to be aggressive. The momentum changed and I stayed on it.

"I've matured and learned a lot about myself, how to handle those situations. Over the years I've had a few unfortunate losses but they have made me stronger.

"It will be my first final but I'm very excited."

Azarenka will be the first Belarusian to contest a US Open final and is the first top seed to get there since Justine Henin in 2007.

That looked unlikely when Sharapova, seeded third, opened with a service hold to 15 and then broke as the Azarenka delivery malfunctioned.

Azarenka was struggling for rhythm and Sharapova moved 4-1 ahead as a brilliant backhand lob secured a love hold.

The number one seed reclaimed one of the breaks and had two chances to bring the first set back on serve, but Sharapova eventually closed out with an ace and pumped her fist in celebration.

Further evidence of her domination arrived as she dragged a helpless Azarenka around the court to strike in the opening game of the second set.

But Sharapova then netted a forehand volley from the baseline and this seemed to bring about a shift in momentum.

Another laboured forehand gifted the break straight back and a double-fault put Azarenka 3-1 ahead.

Sharapova rallied in game seven but failed to convert two chances and Azarenka held firm before breaking again to level the match.

Both players headed for the locker room - permitted when the temperature reaches a certain level - but Azarenka quickly returned to work on her shots, with ball boys providing a supply line.

Sharapova resisted each time but Azarenka was looking stronger and a hold to 15 took her to within a game of victory at 5-4.

She attacked once more and although one match point was squandered, the second was converted when Sharapova sent a forehand long.