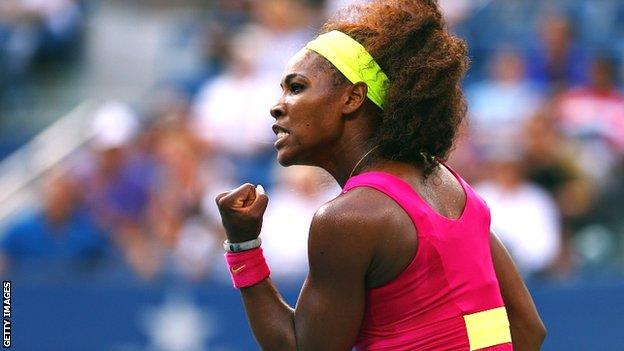 Williams has lost just one of the 26 matches she has played since her French Open first-round defeat on 29 May.

She will bid for a fourth New York title against Azarenka on Sunday.

"Two contrasting semi-finals but two very deserving finalists. Serena was too strong for Errani, as virtually everyone suspected she would be, and the dream of an amazing summer "triple crown" of Wimbledon, Olympics and US Open is now just one match away.

"The best three players of the tournament were the three Grand Slam winners of the season. But only one can now collect a double major return from 2012."

Azarenka will hope to cause a huge upset with victory over Williams, who goes into the match as the overwhelming favourite.

The American has dropped only 19 games in six rounds and is hoping to avenge her in the 2011 showpiece.

"It's awesome to be back in the final again," said 30-year-old Williams. "I dreamt about this all year and I'm really happy.

"It would be great to win again, but Victoria also wants it. I love playing here. It's always an honour and such a pleasure."

Victory against Errani looked likely from the moment she broke serve with a forehand winner for a 2-0 lead in the first set.

Another stinging forehand sealed the double-break as Errani, the first Italian woman to reach the US Open semi-finals in the Open era, struggled to get her racquet to the ball.

The French Open runner-up did not get a look-in on the Williams delivery and an ace left her 5-0 behind.

Cheers rang out round Arthur Ashe as Errani finally held serve, but Williams closed out the set with a backhand winner before striking in game one of the second set with a similarly brutal stroke.

Errani reeled off an inch-perfect forehand to remain in contention at 6-1 2-1, but she was having to hit the lines to stand any chance.

Three booming aces took Williams to 3-1 and a second break arrived when Errani dumped a forehand into the net.

Williams easily moved to within a game of victory and, although Errani saved one match point, ace number nine ended the contest.