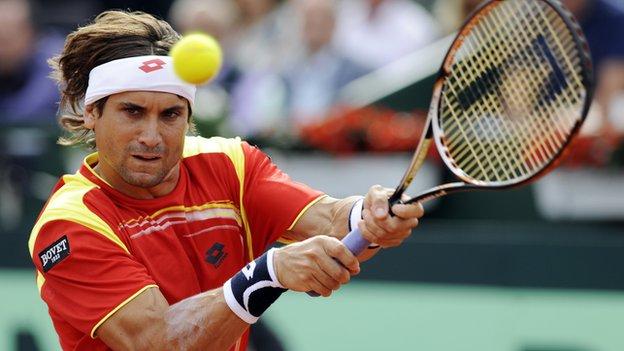 Defending champions Spain will face the Czech Republic in November's Davis Cup final after beating the United States 3-1 in Gijon.

Tomas Berdych sealed the win by beating Carlos Berlocq, who played instead of the injured Juan Martin del Potro.

Spain are hopeful that Rafa Nadal will recover from a knee injury in time to help their attempt to retain the title.

Nadal, a winner of 11 majors, has not played since his shock second-round exit against Czech Lukas Rosol at Wimbledon in June.

"I hope he gets better soon because he is really fundamental for us," said Ferrer.

World number five Ferrer, beaten by Novak Djokovic in the US Open semi-finals, got Spain off to a good start in the tie, played on clay, by beating Sam Querrey 4-6 6-2 6-2 6-4 on Friday.

Twins Bob and Mike Bryan gave the Americans hope with their 6-3 3-6 7-5 7-5 win over Marcel Granollers and Marc Lopez in Saturday's doubles match, and Isner got off to a good start on Sunday.

Del Potro, the world number eight, had been due to face Berdych in the singles on Sunday, but had to pull out after aggravating a left wrist injury, with Berlocq going down 6-3 6-3 6-4.