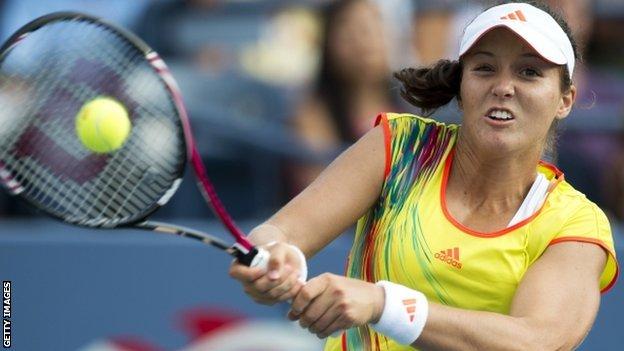 New British number one Laura Robson beat Spain's Maria Teresa Torro in her first match since reaching the last 16 of the US Open earlier this month.

Robson, who beat Kim Clijsters and Li Na in New York, won 6-2 3-1 as Torro retired from their first-round match in China's Guangzhou International.

"It has been a fantastic year for Laura. I think the only way is up. She will have Heather Watson chasing her in the domestic rankings and, although British number one does not mean that much on the international scene, they can keep pushing each other up the world rankings. It is amazing to think that just a couple of years ago we were struggling to get a single player into the top 200, let alone have two challenging for the top 50."

The 18-year-old has taken over from Heather Watson as British number one.

Olympic mixed doubles silver medallist Robson is now ranked 74th in the world, one place ahead of Guernsey's Watson.

Anne Keothavong, at 80th, is the other British player in the top 100 with compatriots Elena Baltacha and Johanna Konta at 141 and 147 respectively.

Robson will next play either second seed Zheng Jie or Chinese Taipei's Yung-Jan Chan in the event which also features France's world number 10 Marion Bartoli as the top seed.

Left-hander Robson is attempting to shore up her end-of-season rankings position ahead of January's Australian Open.

With the world's top 108 players automatically receiving a place in the main draw, Robson will be confident of avoiding a repeat of this year's experience of having to go through qualifying.