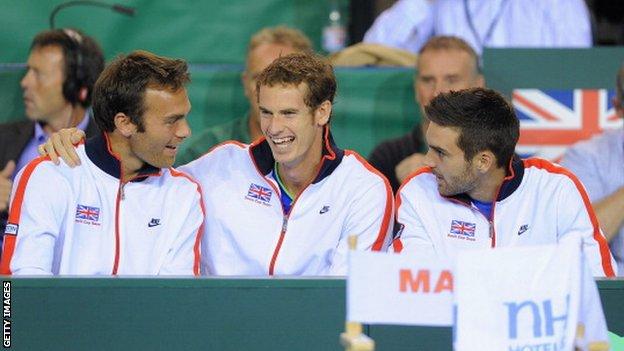 Britain will host top seeds Russia next April in the second round of the Davis Cup Europe/Africa Zone Group One.

Leon Smith's side were the only one of seven unseeded nations to receive a first-round bye and will begin their 2013 campaign on 5-7 April.

A victory over Russia would see Britain play for a place in the elite World Group in September.

The only previous meeting between the two nations was in 1963 when Britain beat the USSR 4-1 in Eastbourne.

Britain have avoided the Europe/Africa Zone first-round matches on 1-3 February and were given a seventh consecutive home tie.

"Wow, another home tie! Russia at home in April," said GB doubles player Colin Fleming on Twitter. "A tough tie but an exciting one!"

Russia won the Davis Cup in 2002 and 2006 but have since lost Marat Safin to retirement, while Nikolay Davydenko has slipped down the rankings.

They were relegated from the World Group this year with a 3-2 defeat by Austria and a 5-0 loss to Brazil.

In the draw for the 2013 World Group, defending champions and this year's finalists Spain will travel to Canada, while Spain's November opponents - Czech Republic - are away to unseeded Switzerland.

The World Group quarter-finals will be played on 5-7 April, with the semi-finals and play-offs on 13-15 September. The World Group final is scheduled for 15-17 November 2013.