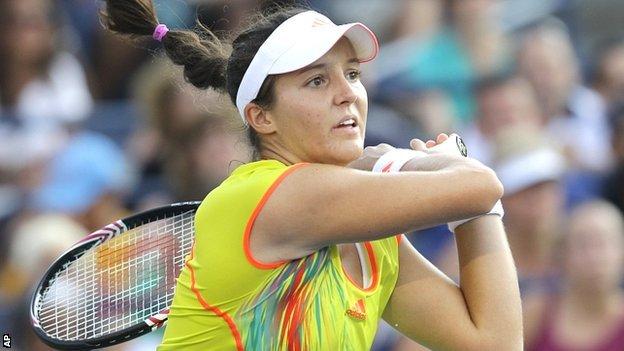 The Londoner is aiming to become the first British woman to contest a main tour singles final since Jo Durie in 1990 in Newport, USA.

History in the making?

The last British woman to win a WTA singles title was Sara Gomer in July 1988 in Aptos, California.

Having won a silver medal in the Olympic mixed doubles and Robson's superb season continues.

She broke Peng's serve three times, and decisively in game 12, to secure a tight opening set.

It was roles reversed in an equally combative second, but Robson composed herself to dominate the decider.

"After New York I'm feeling pretty confident on court and I'm not really having any trouble serving out matches at the moment, which is always good," she told The Tennis Space website.

"But I've still got a lot that I can improve on, so I'm trying not to focus on anyone else's expectations, just focusing on improving and listening to my coach [Zeljko Krajan]."

Robson beat Zheng Jie to make the last eight and having battled past Peng in hot conditions, she will play Cirstea for the first time.

"It's going to be a really tough match because she's a very aggressive player and hits a lot of winners, so I'm going to have to be ready to run a lot, that's for sure," she added.