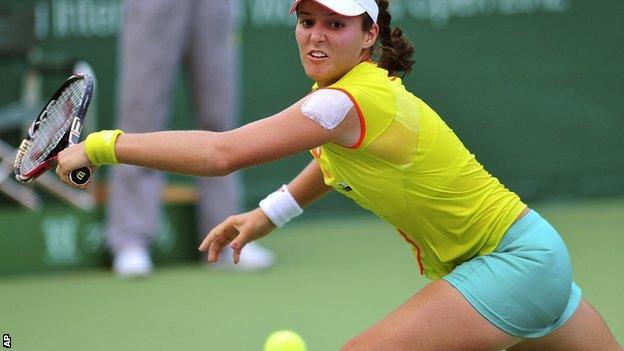 Laura Robson failed in her bid to become the first British woman since 1988 to win a WTA singles final as she was beaten 6-3 5-7 6-4 by Su-Wei Hsieh at the Guangzhou Open.

Chinese Taipei's Hsieh took the first set but the British number one saved five championship points at 5-3 down in the second and battled to win it 7-5.

Robson continued to build momentum into the third set, taking a 3-0 lead.

Sara Gomer was the last Briton to win a WTA singles title in 1988, while Jo Durie was the last to reach a final in 1990.

However, teenager Robson, who made it as far as the fourth round of the US Open at the start of this month, will rise into the top 70 of the world rankings for the first time on Monday.

The first set began on even terms as Robson broke her opponent's serve in the third game then trailed 40-15 on her own serve in the fourth, and saved two break points before Hsieh prevailed.

Hsieh, who won her first title in Kuala Lumpur earlier this year, was using her drop shot to great effect and won the next three games and, though Robson took the eighth after a long battle, Hsieh held her nerve to take the first set 6-3.

After some encouragement from coach Zeljko Krajan, Robson broke Hsieh in the second game of the second set to lead 2-0, but once again Hsieh won four successive games to go 4-2 up.

It left the Taiwanese player only needing to hold serve to close out victory, and it looked like a straight-sets defeat was on the cards for Robson as, despite a spirited rally, she dropped the eighth game to trail 5-3.

But despite the searing Chinese heat, Robson dug deep to save match point on those five occasions in the ninth game, eventually winning four games in a row to seal the second set in style.

"All I could do was keep fighting and going for my shots," said Robson. "I was so tired I wasn't even thinking about whether I was a match point down, I was just trying to finish the rallies as quickly as possible."

And a first British WTA title for 24 years looked on the cards when London-based Robson won the first two games of the third set and saved three break points in the third game to take a 3-0 lead - having won seven games on the trot.

But the pendulum began to swing towards Hsieh as she won the next five games, breaking Robson twice to claim a 5-3 advantage, and although Robson held serve in the ninth game, Hsieh powered to victory.

"It was ridiculously hot for both of us. The heat rule was in so we had a 10 minute break after the second set, and it was tough to have that and start the third set," added Robson, who plays next in the China Open in Beijing, which begins on 29th September.

"They were tough conditions all week and I'm looking forward to getting to Beijing where it will be a little bit cooler."

Meanwhile, British number two Heather Watson reached the main draw of the Pan Pacific Open in Tokyo with a 5-7 6-3 6-2 win over world number 62 Andrea Hlavackova of the Czech Republic in the final round of qualifying.

In Seoul, top seed Caroline Wozniacki of Denmark beat Russia's Ekaterina Makarova 6-1 5-7 6-4 to reach the final of the Korea Open.