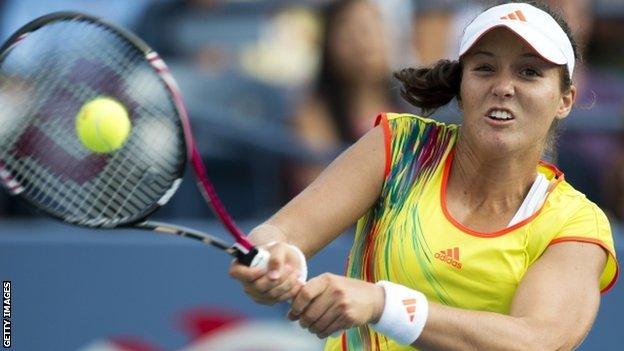 Laura Robson aims to build on her first appearance in a WTA singles final by targeting a place in the top 50 of the world rankings.

The 18-year-old lost to Chinese Taipei's Su-Wei Hsieh in the Guangzhou Open final but will rise into the top 70 for the first time on Monday.

Robson is due to return to action in the China Open in Beijing next week.

"With a few more good wins I should be in the top 50 so I've got to keep working hard," said Robson.

"I think I'm playing pretty well, I feel confident at the moment even though I lost today. I've got qualifiers in Beijing, and it's going to be tough there as it is one of the top tournaments of the year."

Robson won an Olympic silver medal with Andy Murray in the mixed doubles in August before reaching the last 16 of the US Open a month later.

In between the two tournaments she teamed up with new coach Zeljko Krajan, but despite her recent impressive results she is looking forward to some extensive practice with the Croatian ahead of the China Open.

"We haven't actually set any short-term goals, we have hardly had time to practice since we started working together," she added.

"It will be good to get a few more days of practice in before Beijing, work on the things that didn't go to plan in the final in Guangzhou and hopefully I can do well in Beijing."