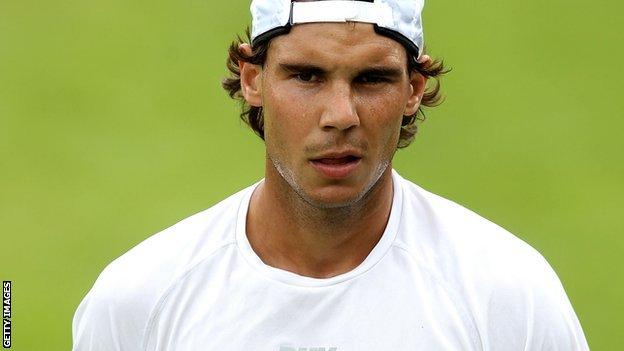 Rafael Nadal has withdrawn from the Paris Masters and the ATP World Tour Finals in London because of continuing problems with his left knee.

The world number four has not played since his at Wimbledon in June.

The Spaniard missed the Olympics and the US Open after revealing he had a partial tear in his patella tendon.

"I will hopefully resume practice soon since I am making good progress with my recovery from injury," said Nadal.

"It's disappointing for me to miss the last two tournaments of the season in Paris and London, but it doesn't come as a surprise."

Nadal's absence is a blow to the World Tour Finals, which start next week at London's O2 Arena and feature the best eight players of the season.

The player ninth in the list when qualification ends following next week's tournament in Paris will take Nadal's place, with Serbia's Janko Tipsarevic currently occupying that spot.

Nadal has struggled with knee problems in the past and was unable to defend his Wimbledon title in 2009 because of tendinitis.

But, despite his latest setback, he said he still had "plenty of years ahead" in the sport.