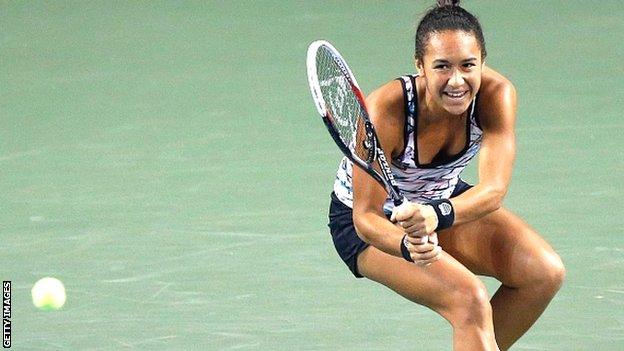 Britain's Heather Watson was knocked out of the Pan Pacific Open in Japan with a narrow defeat by world number two Maria Sharapova of Russia.

Sharapova hit 14 double faults but held firm to repeat her at the 2011 US Open.

Watson came through qualifying and upset Sabine Lisicki in round one.

"It was a tough three-setter, very physical, but I went out there to win and I gave it everything I had," Watson, who aims to finish 2012 inside the world's top 50, told the Tennis Space website.

"I maybe didn't take advantage of winning that close first set and trying to get ahead quick in the second.

Watson twice came from a break down in the first set to force a tie-break, in which she overturned a 3-0 deficit and saved set points before coming through when Sharapova netted a forehand.

The Russian broke early in set two and, although Watson struck back, she held for a 3-2 lead with a sixth ace of the match.

Three successive breaks followed, Sharapova with two of them to take control before serving out to force a decider.

For the third set in succession, Watson lost her first service game - but again she found the same response, levelling at 1-1.

Sharapova broke for the eighth time in the match to lead 4-3 and, serving at 5-4, a ninth ace helped her over the line.

"I didn't play my best tennis but I ended up winning the match and I have a chance of going out tomorrow and playing better," said 2009 winner Sharapova, who made 67 unforced errors.

"I hope to be the champion again, I have such good memories of this court. It was the first major tournament I won after my shoulder surgery."

Sharapova next plays Lucie Safarova of the Czech Republic after she received a walkover against Klara Zakopalova.

Seventh seed Li Na of China overcame Anastasia Pavlyuchenkova 7-5 4-6 6-2 and Australian eighth seed Sam Stosur is also through to round three after battling past Francesca Schiavone 4-6 6-2 7-5.

Meanwhile, Britain's Colin Fleming and Ross Hutchins beat Alejandro Falla and Igor Sijsling to reach round two of the doubles at the Malaysian Open in Kuala Lumpur.

Inglot will face Alex Bogomolov Jr in the first round of the singles main draw after winning three matches in qualifying.